Bako bits: more concerns about housing and Bakersfield prepares to look for a new police chief

Some short takes around down on this first day of the Kern County Fair...

* ... AS IF BUSINESS ISN'T BAD ENOUGH: Turns out the decision to close the courts once a month to save money has had the unintended consequence of hurting the businesses of downtown eateries. If you remember the local courts are now furloughed every third Wednesday. If you work downtown, as I do, you know how strongly the court system fuels downtown commerce. Restaurants like Uricchios and the Sequoia Sandwich Co. thrive off the court clerks, jurors and bailiffs who dine there for lunch, and denying them that commerce once a month can be devastating. Jeff Simpson, one of Sequoia's owners, says the furlough has cost him 25 percent of his business on that one day. Just one more example of tough times all around. 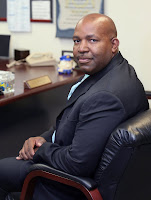 * ... POLICE CHIEF RECTOR ON HIS WAY OUT: It's well known that Police Chief Bill Rector has been thinking about retiring, and now I hear he's made the decision to leave in early January and is likely to announce it in November. It's no coincidence that Rector will turn 50 in January, thus making him eligible for the lucrative city pension that has come under such scrutiny lately. Insiders say the leading candidates to replace Rector are Assistant Police Chief Lyle Martin (pictured right) and Capt. Greg Williamson. (that's him on the left) My money is on Martin, who would become the city's second African-American chief following the popular Eric Matlock who preceded Rector.

* ... MORE HOUSING CONCERNS: The complexity and depth of this Great Recession cannot be understated, and you do so at your own risk. Real estate, for example, has certainly shown some signs of life, but most of the sales are on the low end of the market reflecting the continuing purge of excess inventory and foreclosures. While it's certainly appropriate to celebrate any good news, it's also wise to be cautious. Which is why a story in today's Wall Street Journal was so disturbing. It noted the growing number of "delayed foreclosures" caused by "legal snarls, bureaucracy and well meaning efforts to keep families in their homes" which are "slowing the flow of properties headed toward foreclosure." It continued:

"While that buys time for families to work out their problems, some analysts believe the delays are prolonging the mortgage crisis and creating a growing 'shadow' inventory of pent-up supply that will eventually hit the market. The size of this shadow inventory is a source of concern and debate among real estate agents and analysts who worry that when the supply is unleashed, it could interrupt the budding housing recovery and ignite a new wave of stress in the housing market."

One Irvine real estate  consultant predicted a "flood (of bank owned homes) listed for sale at some point." Stay tuned. We're not out of the woods yet.

* ... MINTER FIELD HANGAR DEDICATION: Don't forget the big to-do out at Minter Field in Shafter this weekend. They'll be dedicating an historic hangar and there will be a B-17 flyover to highlight the weekend. It promises to be a perfect weekend weatherwise. This is a splendid event for youngsters to give them a sense of history, and for history buffs of all ages. The show runs Friday and Saturday and admission is free. The B-17 will be flying in the morning and around noon so don't arrive too later. And you gotta love their poster promoting the event. 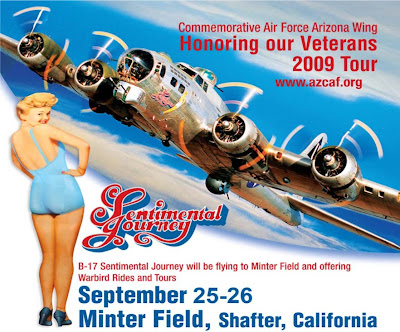 Bill Rector retiring?......those will be some big shoes to fill!!!!

I am surprised to see such a speculation posted without a prior announcement by Chief Rector, I have to wonder if what you "heard" was correct at all. Surely if this were the case he would have been given the due respect of announcing this himself first to his department then to the public. Until such a decision was officially announced any postulation of this kind could only lead to "unintended consequence of hurting" a concept I see from your prior post you are familiar with. Unless of course it was intended.

It's extremely disappointing and completely unprofessional that you did not give Bill the opportunity to announce his own retirement after all his years of service and dedication to the city. You took a little something away from a man who served his city unselfishly and has always put others and his department before himself. One would think the CEO of the Californian would have some sense to build a relationship with the police dept and not divide with also announcing your pick for the next chief.

Apparently what was "heard" was indeed correct. Sorry Whitney, but this is real journalism, not a dinner report. Hats off to The Californian for reporting it as soon as they found out. Remember, the newspaper is not part of the Bakersfield Police PR department.