Short takes around town: Another "First Friday" is upon us, another departure for CSUB fund raising, and a local kid makes us proud

Lots happening around our community so here are some short tidbits around town:

* ... ANOTHER OUT AT CSUB: There's been more turnover in the fund raising office over at Cal State Bakersfield. Sheri Horn Bunk is the latest to leave, opting instead to become Foundation Director over at Taft College. This follows the departure of longtime employee Laura Wolfe, who according to President Horace Mitchell was the victim of budget cuts. Still, the departures of Wolfe and now Bunk have many university supporters talking about new development head Beverly Byl and where she's taking the team.

* ... LATIN ART EXHIBIT: Make sure to redline this Friday on your calendar. After all, it is “first Friday” and downtown will be buzzing. The weather should be perfect (if a tad warm) and make sure to stop by Metro Galleries over on 19th Street to catch “Latination,” a juried show of art with an Hispanic theme. Some of this stuff is quite good and Don Martin, galleries owner, tells me there will be complimentary Mexican eats along with a no host margarita bar. The pictures below are by Patti Dolittle (red scarf) and Kim Jessup. 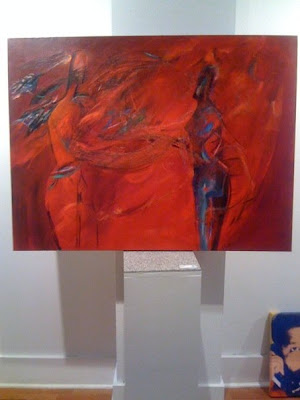 * ... BUSINESS INDUSTRY BREAKFAST: The 24th Annual Business and Industry Leaders Breakfast is set for Thursday, Sept. 17, over at the Petroleum Club. This is put on by the Golden Empire Gleaners and is always a good place to network with local business leaders. This year’s speaker: Sean McNally, vice president of corporate and government affairs for Grimmway Farms. Call 661-324-2767 for more information.

* ... JUST THINKING: Is there any weirder story than the arrest of Phillip Garrido in the abduction of Jaycee Lee Dugard? You have to wonder how this one case will affect California’s plan to partially relieve the budget mess by paroling thousands of prisoners early. And it has certainly raised questions about a system that paroles a man like Garrido, who served only 11 years in prison after a rape and kidnapping that landed him a 50-year sentence. Expect a huge outcry in the name of this poor girl who spent 18 years held against her will.

* ... LOCAL KID DOES GOOD: Always nice to recognize local kids doing well. The latest is Troy Harvey, a Bakersfield High and Bakersfield College grad and former Californian photography intern, who graduated Sunday from the Brooks Institute of Photography in Santa Barbara. Troy is now in the job market and is contemplating whether to remain in Southern California or to return to Bakersfield. Thanks to former Californian photographer John Harte for the tip on Troy and the picture below. 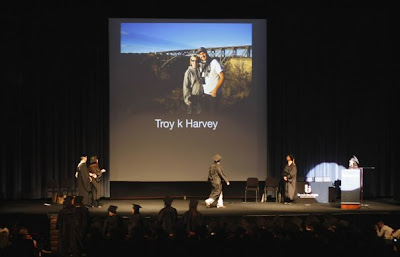 Posted by Richard Beene at 9:17 AM