* ... BIRTHDAY FOR STOCKDALE: Stockdale Country Club is getting ready to celebrate its 85th birthday next month, a milestone that deserves some recognition. Club tennis pro Hank Pfister told me the club's history is a fascinating reflection of our community, starting when Lloyd Tevis and partners Ali Haggin and William (Bill) Carr formed the Kern County Land Company in 1890. In 1896, according to Pfister, William Tevis (son of Lloyd Tevis) purchased the land on which the club now sits and built a 9,000-square-foot mansion on the site. Lloyd Tevis later developed a nine-hole golf course on 300 acres, using the mansion as the club house, and opened the club for public play on February 18, 1923. Original dues were just $5.50 a month or $1 for a round of golf.  In 1925 Lloyd Tevis sold the property to a group of investors who formed the Stockdale Holding Company and began what is now the private Stockdale County Club, thus the 85th birthday. And as Pfister said, "now you know the rest of the story."

* ... BAKOBOB SHOUT OUT: All this good natured banter over whether the term "Bako" is an appropriate nickname for our town is old hat to Robert H. Brumfield III, a local attorney specializing in real estate and business law with Kronick, Moskovitz, Tiedemann and Girard. Turns out Robert not only embraces the term "Bako" but also uses it on his personalized California license plate called "BAKOBOB." And he's had the tag for a full decade. That's what you call an early adopter. 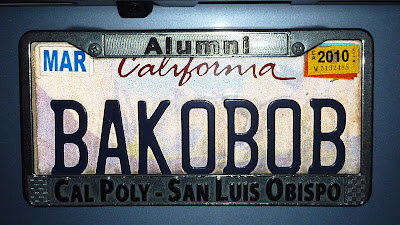 * ... KARPE IN AT TERRIO: It looks like Ray Karpe, until recently the president of Karpe Real Estate, has landed on his feet as the new chief operating officer of Terrio Therapy-Fitness, Inc. Owner Tim Terrio told me that his business had grown so quickly these last few years that he needed a right-hand person to help him "continue to grow, but grow responsibly. I'll continue to do the vision and program development and Ray will run the operations. I couldn't pass him up." Karpe ran the company bearing his family's name until he had a falling out with his father, Bob Karpe. He told me he's anxious to get started and is looking forward to his new career. Terrio now has 12 locations, including one in Fresno, with some 150 employees.

* ... HISPANIC RADIO: The Bakersfield-area radio ratings for the Fall are out and - no surprise - reflect the growing influence of the local Hispanic market. The perennial winners continue to dominate the primary market, with American General Media's Rhythmic station Hot 94.1 continuing as the market leader by a large measure. AGM also has the leading Hispanic station in town with La Caliente 96.9 FM. Country icon KUZZ held its own and was in a respectable second place in the survey. The Hispanic influence in our market is interesting - and impressive. Latin heavyweight Piolin por la Manana is the leading morning host on the dial followed by Hot 94.1's Romeo and KUZZ's Steve Gradowitz.
Posted by Richard Beene at 1:40 PM