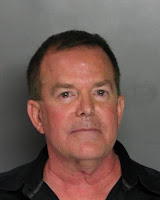 HuffingtonPost.com followed the DUI arrest of state Sen. Roy Ashburn by reporting that he had visited a gay nightclub before being pulled over by police. The website referred to Ashburn as "a fierce opponent of gay rights" but noted he had left a gay nightclub and had a male passenger with him at the time of his arrest. Read the full story here. His booking photo is at right.
Posted by Richard Beene at 1:04 PM

The Californian hasn't mentioned any of this. Are you guys covering something up? This guy bangs of gays yet he's arrested after leaving a gay bar? Come on guys. Get some guts!

Ashburn is a turncoat and a traitor and now he's shown his true colors. No more votes! He needs to leave!

I hate "Sources." If you have something to say ... step forward. All the media is doing today is covering a story by the CBS station in Sac. The only story is to say that another TV station is saying that "Sources" are saying this or that. I'm not saying that the story is falce, but I am saying that I don't trust those who hide. I do think that any respectable news group should try to confirm sources when taking a story from another news group.