The real face on the recession, getting ready for gridlock and the courage of a rape victim

* ... JOBLESS: I received a thoughtful note from a reader challenging my notion that foreclosed homes are the "picture of this recession." The contributor noted that it's not the house itself, but rather the person in the unemployment line that is more representative of these difficult economic times. "It's the face of the person at the unemployment office, trying to figure out the confusing and contradictory paperwork, trying to get a hold of someone to answer simple questions and hoping that a paperwork snafu or single Senator won't result in the loss of benefits or force him out of his home and make him wonder how he will eat." I stand corrected. These are tenuous times for so many of our neighbors. I appreciate this input, which stands  in contrast to others who -  blessed with jobs and homes and security - trivialize the pain of others by waltzing through this recession engaged in idle gossip seemingly oblivious to what is happening around them. And so it goes.

* ... COLLEGE BOUND: Terri Richmond, social studies chair over at Foothill High School, alerted me to two of her International Baccalaureate students who have been accepted into some impressive colleges. Maria Zepeda will choose from Wellesley, Yale, Stanford, Brown and Columbia, and Omar Gonzales has been accepted at the University of Southern California and Emory University in Atlanta. Going on to any college is something to celebrate, but these two kids have really excelled. Well done.

* ... MORE FOOTHILL: Beyond the kids mentioned above, Foothill High has a lot more to crow about. Joan Herman, lead counselor, told me the school is seeing a "depth and breadth of college acceptances that thrills us: Yale, Columbia, Brown, Wellesley, Wesleyan, Emory, Grinnell, Stanford, USC, Occidental, UCLA (9!), UC Berkeley ... What is especially notable is that these students have done it with none of the advantages that others enjoy: most of our students come from extremely low-income homes, are usually the first in their family to go to college (and sometimes to finish high school) and often come from homes where English is not the first language. Despite those obstacles, they achieve at the highest levels!" Joan gave special thanks to Rebecca Farley, the international baccalaureate coordinator who is tireless in her efforts to prepare these students to excel.

* ... VICTIM COURAGE: I was moved by the story of rape victim Donna Bulford speaking at Cal State Bakersfield this week.(read the Californian full story here) Bulford was the victim in the "Babies R Us" case in which she was robbed, kidnapped and raped in broad daylight. It took courage for this young woman to face her accuser and then share her story with others. This is a strong young woman who obviously was reared by parents who filled her with confidence and self-esteem. (Californian photo by Michael Fagans) 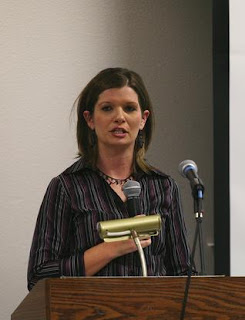 * ... GRIDLOCK: Don't say that City Manager Alan Tandy didn't warn us. Now that the rainy season is about over, work is getting underway on road projects across town. And if you think it's bad now, just wait because it's going to get much worse. Consider the already nightmarish intersection of Brimhall and Coffee roads, where they are rerouting a sewer line and planning massive improvements. The morning and afternoon commutes - already hellish - are starting to look like something you expect elsewhere. And don't forget about the year-long project at Coffee Road and Truxtun Extension. Getting through that intersection is going to make a colonoscopy look like a walk in the park.

* ... BAKERSFIELDISM: You know you're from Bakersfield when "you complain that it takes you almost 20 minutes to go from one side of town to the other."
Posted by Richard Beene at 9:06 AM

Ya know, I am NOT a Gastroenterologist, but I must take exception to your traffic/colonoscopy metaphor....using medical procedures as the yardstick for measuring all things difficult or onerous does a tremendous disservice in perpetuating the myth that these are procedures to be avoided or at best, procrastinated. Many lives are improved or saved by these valuable life-saving diagnostic procedures...too many are lost from ignorance and needless avoidance.

One reader sent me a private email saying we invaded the rape victim's privacy by using her name. For the record, we do not normally publish the names of rape victims but in this case, Donna Bulford approved it. We would never have done so otherwise.