* ... TARGET SOLICITORS: One of my pet peeves is being unceremoniously greeted (or harassed) by those in-your-face solicitors outside mainstream businesses. I'm not talking about the Girl Scouts or Salvation Army here, but rather those scruffy looking types asking for money for some obscure organization that may or may not be legitimate. We've all encountered them and it's never a pleasant experience running the gauntlet of their pleadings and "God bless yous." So it was nice to see the folks at Target striking back. On Sunday the new Target store on Stockdale Highway stationed one of its own employees outside advising customers that the "solicitors" were not endorsed by the store. Target clearly wanted to dissociate itself from this questionable crowd and I found it an effective maneuver.

* ... FUTURE ARCHITECT: Kudos go out to Katie Gilfoy, who is graduating in June from Cal Poly San Luis Obispo and headed to the University of Southern California master of architecture program. Katie is a 2005 graduate of Stockdale High School and the daughter of Kelly and Gail Gilfoy. Her mother is one of the staffers at the Bakersfield Museum of Art and dad Kelly is sales director for Specification Sales, a plumbing and safety firm based in Ontario, Ca.

* ... DAVIS BOUND: Also nice to hear that Camille Horvath, daughter of Alex and Joyce Horvath of Northwest Bakersfield, is heading to UC Davis to spend the next four years. Camille will graduate from Frontier High School and is among a lucky group of local kids to be accepted by a school in the UC system. Alex is head of photographer at The Californian and Joyce is an X-Ray technician at Truxtun Radiology Medical Group. (Camille and proud mother shown below) 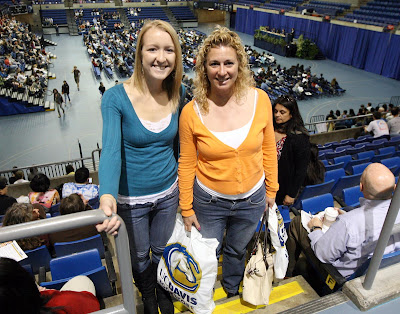 * ... MORE TREASURES: Reader Stephen Montgomery responded to my recent post about locally owned eateries with his own list of "hidden treasures" in our community. "When you said 'hidden' I couldn't help but think of one of our favorites. T. L. Maxwell's Restaurant is well hidden in a 19th century building also well hidden behind the Haberfeld Building. While Terry isn't a credentialed chef he has developed his own excellent menu and does a superb job of paring wine with a fine meal. All this in a vintage interior rich in atmosphere. Another is Rosa's Italian restaurant in east Bakersfield. Lucky is the diner who discovers they are serving an-off menu item like lamb shanks. Another favorite eatery is Bit of Germany. The food served here is really German and the place has been a long-time survivor having been burned out. Best wishes and happy dining!"

* ... REMEMBER BONNIES: I failed to include Bonnies Best Cafe as one of the recommended locally eateries that  never seems to disappoint. Bonnies is located at the corner of 21st and F streets and specializes in sandwiches and dinners-to-go. Laurie Watson is the owner and her daughter Katie is banquet manager over at the new Padre Hotel.

* ... BAKERSFIELDISM: You know you're from Bakersfield when "you notice your car overheating before you drive it."

Congratulations to Katie Gilfoy and her family! A well-deserved achievement for such a lovely and talented young lady. Katie went to SHS with my son Danny and I’ve watched her with interest for years. She is gifted on many levels. I am truly excited to see her creations someday soon!

The Haberfelde was built in 20th century, around 1927.