Three lost children arrested in savage beating of grandmother while life goes on for the rest of us ...

* ... BRUTAL BEATING: What are we to make of the arrest of three teenagers in the savage beating death of 81-year-old Dorothy Session in her east Bakersfield home? Here we have three runaway teens, all apparently so lost and angry that they allegedly beat this poor woman to death for no apparent reason. One thing we can agree on is Sheriff Danny Youngblood's assertion that these "kids" gave up their rights to childhood when they beat this grandmother to death. And for what? To burglarize her home? The suspects were identified as David Deshawn Moses, 17, and sisters Angelique Elandra Nash, 17, and Katila Ann Jean Nash, 15. (Photos courtesy of KERO-TV) 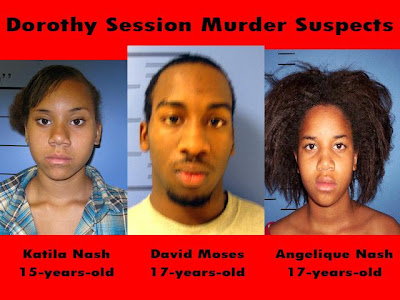 * ... BIKE RACE: I headed out to the USA Cycling bicycle road race off Bena Road on Sunday, a truly stunning day that featured more than 400 riders from across California. This was one of those events that attracts a narrow niche of enthusiastic followers but it showed off our community beautifully. The 30-mile route went from Towerline Road down to Caliente and back. I spotted a number of local riders there, including Hank Pfister, Mike Marotta, Jeff Simpson, Mike Hudson, Pam Awe, Mike Noel, Tom Morgan, David Rous, Adam Hensley and Gareth Feldstein just to name a few. The event was coordinated by Sam Ames from Action Sports. 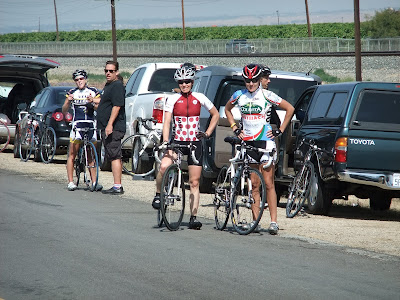 * ... YOUNG KARPE: Was pleased to hear that Robert Karpe, son of Ray and Lisa Karpe and a senior at Garces Memorial High School, has decided to attend college at the University of South Carolina. Robert's final two choices were South Carolina and Tulane University, and after some soul searching he decided to head to Columbia, S.C. to spend the next four years as a Gamecock. Robert's father Ray is the chief operating officer at Terrio Therapy-Fitness.

* ... HIDDEN TREASURES: One of the great things about our community is the number of locally owned restaurants with outstanding food and service, many tucked away in out of the way places. There's Luigi's Restaurant and Delicatessen of course, Uricchio's Trattoria, Cafe Med, 24th Street Cafe, Woolgrower's, Goose Loonies, Sequoia Sandwich Shop and all the Basque eateries. I had a chance to stop by two of my favorites this weekend, Casa Munoz over on Union Avenue where service and the Mexican fare is always over the top, and the Great Castle Chinese restaurant also on Union Avenue. Try the seafood noodle soup at Great Castle, large enough to feed two and with some left over.

* ... BAKERSFIELDISM: You know you're from Bakersfield when you "know that Hodel's used to be at Valley Plaza."
Posted by Richard Beene at 11:51 AM