* ... LAKEVIEW GUSHER: If you think the BP oil disaster in the Gulf of Mexico is bad, consider the 1910 Lakeview Gusher that blew between the towns of Taft and Maricopa. The total volume of oil spilled at the historic Kern County gusher was 378 million gallons, the equivalent of nine million barrels. The Deepwater Horizon blowout has yet to reach half that size. I'm not downplaying the economic and environmental impact of the Gulf disaster, but the Lakeview Gusher still stands alone in terms of sheer volume. In fact, it remains the largest oil spill in history. The Lakeview spill took 18 months to get under control and created a lake that workers actually crossed in wooden row boats. (photos courtesy of the West Kern Oil Museum 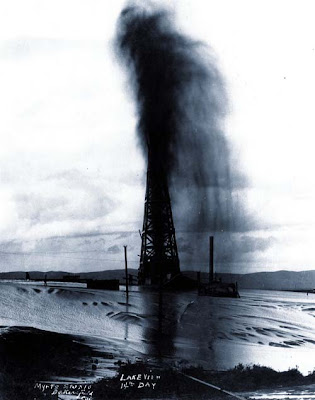 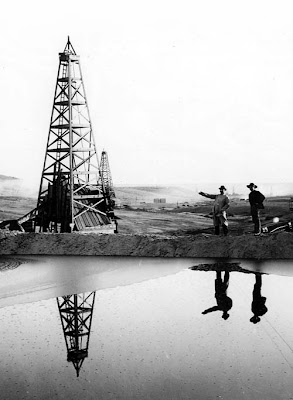 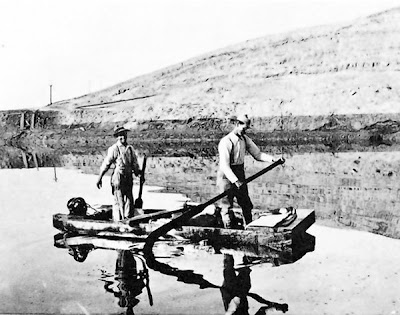 * ... REMEMBERING DUDLEY'S: Faithful reader Glen Worrell recalled that the old eastside eatery  Dudley's (on the corner of Mt. Vernon and Quincy Street) primarily catered to boys while the girls ate across the street at Hopi's. "I worked at Dudley's my junior year (at East Bakersfield High School). Dudley had a platter of spaghetti and beans with one slice of bread (a penny a slice for more bread). That was 15 cents. There was also tamale and beans for 20 cents - no bread. Dudley also had a plate lunch that featured meatloaf, mashed potatoes and a vegetable (no bread). You could always get a slice of bread for a penny. About half way between Quincy Street and Flower Street was another place for students to eat. Boy and girls both ate there. That's where the smokers went. I still mix spaghetti and beans together at Woolgrower's!"

* ... COUNTY WORKERS: Reader Mona Martin took me to task for suggesting that public employee unions haven't felt the same pain as private sector workers in this recession. She noted her husband has worked for the county for 24 years and argues it has been anything but a cakewalk. "One would think that after 24 years our family wouldn't have to bite our nails until they bleed during budget hearings, but we always do, and let me tell you, it has gotten old." She went on to say that he has been reassigned and suffered multiple pay cuts. "We are not getting rich off his job, only expecting what was promised for his sacrifice of pay increases ... Please reconsider your impression that county workers don't know how to suffer cutbacks."

* ... BIG JOE: Had a nice chat the other day with local trainer Joe Peterson, one of our community's true competitive athletes. I found him at Yokuts Park after his morning boot camp ended and he shared his thoughts about competing in the most recent Race Across America bicycle race. It was his 11th time doing the race - that is amazing in itself - and this time his mixed tandem team broke the previous RAM record by 5 1/2 hours. "And it was the first time I went across the entire country without one drop of rain," he told me. "In fact we had very little wind even in Kansas." Congrats, Joe.

* ... SPOTTED: Saw this on Twitter, posted as a re-tweet by Rep. Kevin McCarthy: "Think Wimbledon tickets are expensive? Our national debt has gone up by $1,729,000,000 during the Isner versus Mahut match."

* ... BAKERSFIELDISM: From Facebook: You know you're from Bakersfield if you remember "cruising Chester Avenue and Stockdale Highway on date night and the drive-in theater right off the freeway at the airport exit."
Posted by Richard Beene at 11:10 AM

The Lakeview Gusher is probably one of the biggest spills of all time. For a graph and some analysis on trends of size of oilspills see

You're not really from Bakersfield if you can't remember the name of that drive-in.( It was the The 99 Drive-In)