* ... GOOD SAMARITAN: From readers Gene and Shirley Takach, the story of a local good samaritan: "Recently while walking our pug Otto, we were attacked by a loose pit bull in the intersection of Old Farm Road and Palm Drive. A good samaritan stopped in the middle of the intersection, ran over and quickly got the pit bull to stop the attack and to turn tail and leave. Thankfully, due to this stranger's willingness to intercede in a vicious attack where he also could have been severely injured, Otto and I had only minor bites. It is heartwarming to know that there are people in Bakersfield who practice The Golden Rule, 'Do unto others as you would have them do unto you.'  Our good samaritan, Steve, wished to be anonymous but we will be forever grateful for his bravery."

* ... WHAT WORKS: I spend a lot of time lamenting bureaucracy and unresponsive public agencies, so it's a treat when you run into things that actually do work. And it happened at the California DMV office on F Street downtown. Imagine that. A trip to the DMV is normally akin to undergoing a colonoscopy without anesthesia, but apparently no longer. The DMV now allows you to make an appointment online for a specific time and purpose. Mine was for 9:20 a.m. on Friday for a new driver's license. I arrived at 9:15 a.m. and was called precisely at 9:23 a.m. The process took two minutes and I was out the door at 9:25 a.m. Now that is something to celebrate.

* ... FIGHT ON: Looks like another local kid is heading to Los Angeles to attend school at the University of Southern California. This according to former Kern High School District trustee Bob Hampton, himself a proud USC alum. His granddaughter, Stockdale High graduate Emily Bernstein, will soon be off to "Figueroa Tech" and four years of chanting "Fight on!" Her parents are Dan and Karen Bernstein.  The Bernsteins own a large engineering firm in town called Processes Unlimited, International. Emily will major in chemical engineering.

* ... BAD FORM: Would whoever left the two used diapers, the Bud Light cans and the Doritos bag  down by the river at Beach Park please return to discard them? 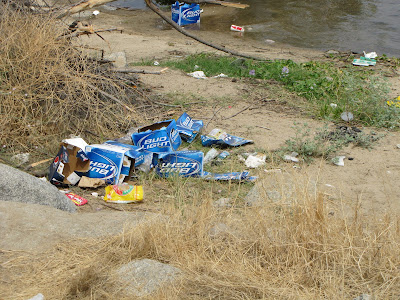 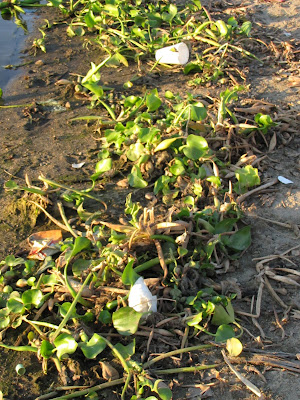 * ... OVERHEARD: Lots of buzz among downtown residents that a new grocery store may be headed for the area. There hasn't been a downtown grocery since Fike's closed some years ago, forcing residents of Westchester, Riviera Westchester and Oleander to either head to the Southwest or to the East side of town up Highway 178.


* ... BAKERSFIELDISM: From reader Terry Willey: You know you're from Bakersfield "when you know the Grapevine isn't where you get your wine from."
Posted by Richard Beene at 11:03 AM

I'm glad you posted this. I am truly disgusted every time I ride by the parks.

FINALLY! A grocery store downtown. If I had the financial backing I would have had one down there years ago.

If you think this is bad, go by Silver Creek Park and check out the crap these people leave. I'm not leaving my name because I don't want to be accused of being a racist, but these are Mexican families who never clean up after themselves.