* ... BAD FORM: My earlier post about the trashing of our parks triggered a response from readers like Dee Rhodes, who shared her own frustration with this behavior.  "I know . . . I know . . .  It is probably the same woman that pulled up to the stop light at Oswell and Bernard (a photo-enforced intersection), literally opened her car door, physically got out of her vehicle with an arm load of garbage, deposited it on the street, in full view of operating cameras. She did not get out of her car just once, she got out of her car three separate times, each time laden with unimaginable garbage she placed in the street.  Had I have done something so reckless and heinous as to run this red light I would have been ticketed! Hmmmm."
* ... MORE COACHLIGHT: Received a nice handwritten note (that doesn't happen every often these days) from George and Carol Bracchi. They had fond memories of Bill and Pauline Wright, former owners of the old Coachlight Inn. Apparently they also owned a drive-in on Chester Avenue before buying the Coachlight. The Bracchis also lamented so many changes in east Bakersfield and recalled Mother's Bakery, where they Carol learned that a baker's dozen was actually 13.

* ... GRIDLOCK: Get ready from some real traffic snarls on one of our busiest streets: Truxtun Avenue. Starting Wednesday (today) traffic will be reduced to one lane on both Truxtun and Mohawk Street for several weeks as work continues to connect Mohawk to Rosedale Highway.  This should prove interesting during the morning and afternoon rush hours. Construction should last several weeks.

* ... ON THE MEND: Local attorney David Cohn, managing partner of Chain Cohn and Stiles, is on the mend after a nasty fall on his mountain bike this past weekend. Dave was riding the trails near Mammoth, enjoying a weekend out of the Bakersfield heat, when he took a spill that required 32 stitches in his thigh. He's out for a few days recuperating.

* ... OVERHEARD: A couple who regularly visits Carpinteria is warning others to beware of the local police. Apparently they are on a ticketing rampage, citing minor parking and open container infractions to raise money for the city. "I overheard a cop telling one person that the city manager told them to put the heat on because they needed to raise money," one frequent visitor told me. Another seasonal "Carp" resident said he hadn't witnessed any stepped up enforcement and was thankful that the city and police were working to maintain a "family friendly" environment in the seaside community. 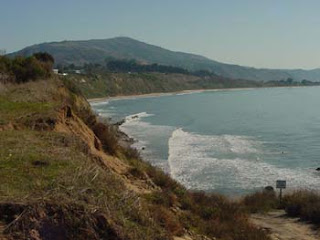 * ... BAKERSFIELDISM: You know you're an east Bakersfield old-timer if "you remember where the original Stinson's Stationers was located. (Kentucky Street just west of Baker.)
Posted by Richard Beene at 1:57 PM

Don't the mtn bike manufacturer or Mammoth Mtn. have any culpability in Mr. Cohn's fall?
I'm quite certain that SOMEONE is responsible!