As the city gets ready to launch an anti-littering campaign, used diapers show up in local parking lots

* ... OUR SHAME: Got a call the other day from Dianne Hoover, director of our city Parks and Recreation Department. Turns out she is spearheading a new effort to heighten public awareness about littering, which by any measure is out of control in our community. Hoover is clearly frustrated with the way some of our citizens literally trash our parks on the weekends, leaving behind everything from paper cups and plates to soiled diapers. How many times have you driven down one of our streets and watched as some knucklehead nonchalantly (and without shame) tosses his fast food wrappers out the window? "In some ways it means changing our culture," Hoover said, "and that's not easy to do." But at least it's a start, and it deserves all of our support. Interested? Have ideas? Call Hoover at 661-326-3866 or email her at dhoover@bakersfieldcity.us.

* ... SPOTTED: And this is why Hoover's campaign is so important. I was running errands the other day and ended up at Target on Rosedale Highway, where I was greeted with a used diaper sitting near a small bush on the concrete median, not 15 feet from a Target trash container. Later that day I ended up at the new Target on Stockdale Highway where - surprise! - I found my second used diaper of the day in the parking lot next to a black Chevrolet SUV, baking in the afternoon heat. Ever wonder about the lessons these mothers and fathers will be handing down to these infants? And so it goes. 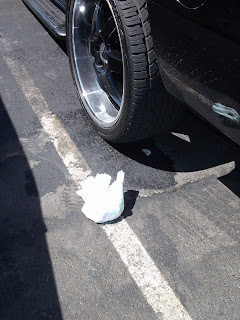 * ... NON-PROFITS: It's that time of year when the non-profits are rolling out their annual golf tournaments to raise money, and it should come as no surprise that many are lightly attended. Charitable giving is down, unemployment is up and every business person I know has battened down the hatches to ride out this recession. Few people are writing checks for $500 to field a foursome anymore, no matter how worthy the charity. One recent non-profit tournament had half the turnout as last year, and given the dismal economic outlook for the next year, I don't think things will get better anytime soon.

* ... CANCER FIGHT: If you do have a couple of spare bucks, and you want to support a worthy cause, check out the Pyrenees Fiesta this Saturday from 6:30 p.m. to 11 p.m. at the Bakersfield City Firefighters Hall on Wible road. Fifty dollars gets you dinner, dancing an an auction and proceeds benefit the Mendiburu Magic Foundation, which focuses on cancer research and serves local families who have a loved one fighting cancer. Contact Brian Mendiburu at bmendiburu@bak.rr.com for details.

* ... LARSON'S DAIRY: Randy Hamm, the long-time journalism adviser over at East Bakersfield High School, wants to know about a hippopotamus, named Sam, who apparently lived at the old Larson's Dairy on Larson Lane. "We moved into that neighborhood in 1983, and there was no sign of a hippo by then. Maybe some of your readers will remember this."

* ... THOMPSON'S: Michelle Beck adds her memories of the old Thompson's Petland. "My grandmother, Emilie Butterfield, worked at Thompson's Petland from the late 1950s to the early 1970s.  Thompson's didn't sell typical pets like cats and dogs, but they did sell hamsters, parakeets and snakes. They also sold some more unusual pets, such as golden mantle squirrels and small monkeys.  One time, my grandmother brought a sickly monkey home over the weekend, because it wasn't eating well and needed special attention. My mom, Kathy Davis and my aunt, Judy Worley, had pet golden mantle squirrels from Thompson's when they were young girls. My grandma told me a story about a time when a customer wanted to buy a particular snake from a terrarium containing six or seven snakes. The man who usually took care of the snakes was on his break, and told my grandmother the customer would have to wait until the man's break was over. My grandma said, 'Who needs you? I'll do it myself!' stormed out, grabbed the snake and put it into a bag for the customer.  I can remember going in there during the 1970s when I was a kid. I don't think they were still selling monkeys and squirrels by then, but I can remember many terrariums of fish and reptiles as well as cages of birds. I loved going there."

* ... BAKERSFIELDISM: You know you're from Bakersfield when "you know summer is never really over until the Kern County Fair wraps up."
Posted by Richard Beene at 10:13 AM

Be the change you want to see in the world, as Gandhi said. Carry a few plastic bags in your trunk and, when you come across the litter in a parking lot, grab one of your bags and scoop it up and dispose of it properly. You can't change others, but you can do a little bit yourself, yes?