* ... MARV: It was good to catch up with Marvin Steinert at my downtown Rotary Club meeting last week. He was there with his longtime wife Nadine, and son Greg. If you remember, last year Marv suddenly and unexpectedly came down with "temporal arteritis," a condition that blinded him virtually overnight. A man of deep spirituality and faith, Marv dealt with his blindness and continued his generosity to the community that he so loves, writing a check for $50,000 to Memorial Hospital's drive to create a children's medical center. Good to have you back, Marv. 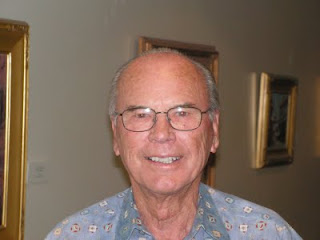 * ... BOOZE CHECK: Local advertising agency owner Marlene Heise got a chuckle when she ordered a box of wine that was delivered by United Parcel Service. On the box was a warning reading: "Adult signature required.... Do not deliver to an intoxicated person." Say what? So are UPS drivers now going to be administering field sobriety checks?

* ... SPOTTED: An early morning cyclist said several hundred Muslims gathered at Yokuts Park Friday morning, presumably to mark the end of Ramadan. I suppose it's a good thing that it went virtually unnoticed, particularly in this climate of hair-trigger tempers,  talk of burning Korans and the ninth anniversary of September 11.

* ... WEEKEND: Another beautiful weekend in town. Perfect weather, almost fall-like in the morning, and every neighborhood festooned with American flags remembering the sacrifices of so many on the ninth anniversary of the September 11 attacks on the World Trade Center buildings. Huge crowds enjoyed the annual Village Fest as well as the Greek Festival on Truxtun Avenue. It was also nice to see a large group from Cal State Bakersfield spending their Saturday cleaning up trash along the river and bike trail on Truxtun Extension as part of the Day of Giving Back.

* ... WEATHER BIRD: Reader Fred Cierley wrote to recall working as head usher at the California Theater while he was in high school in the 1950s. "On the west side of Chester Avenue between 19th and 20th street, on the top of one of the buildings was a very large neon sign that was called the weather bird. When it rained, he stayed in his house, but when the weather was clear and sunny, he would come out and stand under the sun. I think it was taken down in the 1960s when I was in the service. Does anyone remember it?"

* ... YSABEL'S RECIPE: Several readers have asked for Ysabel Forker's guacamole recipe that was featured in a recent Bakersfieldism, so here it is, But first some background on Ms. Forker: she taught Spanish at Bakersfield College for decades and kindly gave out the recipe to hundreds of students through the years. One reader described her as "a large-boned woman with coal black hair and a dark complexion... a presence in the community and in the local and statewide Republican party... She was born in 1892, probably in Bakersfield. She, her brother, Wilfred, and her sister, Alma (Trowbridge), were prominent figures in Bakersfield for decades. Ysabel Forker graduated from Kern County Union High School, probably in 1911, and from UC Berkeley in 1915. As best I can determine, she began teaching college Spanish in Bakersfield in 1915 or 1916. I don't know when she retired, but she was still there in 1961. She died in 1980." Her recipe (serves eight to ten): one can of "Ortega" chiles, two green onions, one-half clove garlic, one lemon, two teaspoons of olive oil, two large avocados,  salt and pepper.
Now, split open chiles, remove seeds and veins, then chop fine. Chop green onions very fine. Mash garlic in small quantity of salt. Mash avocado meat, then mix well with chopped chiles, onions, garlic and while mixing add lemon juice, olive oil and salt and pepper to taste. Beat mixture well, cover and place in cool place until ready to use. Note: The can of Ortega chiles would be the four-ounce size.

* ... BAKERSFIELDISM: You know you're from  Bakersfield "if you think stop signs are just a suggestion."

Mr. Cierley describes the Weather Bird well. More detail: It was a giant Coca Cola ad atop the Sill Building on the northwest corner of 18th and Chester.