Is it 'beneath' children to pitch in and clean up some trash? A principal bows to a complaining parent

* ... LITTER: A reader who asked to remain anonymous had this to say about the litter problem that plagues our community. "Perhaps one of the reasons we have so little regard for the litter problem would be explained by an incident shared with me by a local primary school teacher friend. The practice was that each of the classes took turns, in rotation, picking up loose trash before they returned to their classroom after recess. One of the mothers went to the principal to complain that it was 'beneath' her child to do that and so the principal canceled that responsibility teaching exercise for all the classes. Since when it is 'beneath' a child to clean up after themselves and to assist others as well?" Wouldn't you love to know the name of the elementary school involved here as well as the name of the complaining parent? 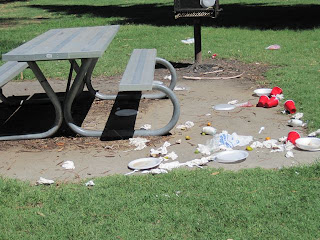 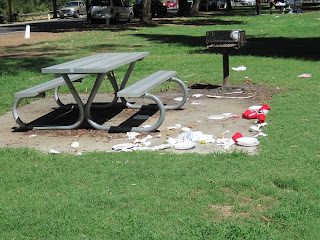 * ... CRIME WATCH: I am always encouraged to hear about folks working together to keep our community clean and safe. At the end of the day, it is up to us to make it happen. David Collins, a sale representative for Commercial Trade, Inc., lives in the Northeast and addressed the issue by founding the South Oswell Neighborhood Watch. "Over the past year we have reported over 70 graffiti hits to the city, removed over 90 pieces of graffiti and picked up over 140 bags of trash." Well done, David.

* ... VALLEY CLOUT: Nice to read in the Wall Street Journal how important the San Joaquin Valley is in the important Senate and Governor's races. Reporter Jim Carlton noted that Senate candidate Carly Fiorina  had made 22 trips to the Valley since announcing her candidacy. Locally, it seems hardly a week goes by that either Fiorina or Republican gubernatorial candidate Meg Whitman is not somewhere in Kern County. The Valley is seen has holding some of the crucial swing votes in a tight race for both offices. 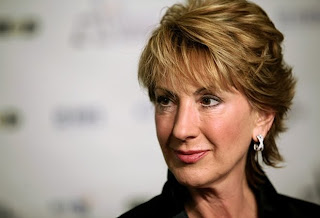 * ... HOLY BOWL: The annual Holy Bowl football game between Garces Memorial High and San Joaquin Memorial is this Saturday at Garces. As part of the game, Garces will honor the 25th anniversary of the 1985 undefeated Valley Championship football team at half time. Among those on the team were Gino Valpredo, co-owner of Luigi's Delicatessen; Mike Lewis, a Garces record holder for career yards passing; Kevin Bead, Garces record holder for interceptions in a game; Dr. Josh Tobias, grandson of Sam Tobias, whom the Garces football field is named; Kelly Bellue, who played rugby at UC Berkeley; and Bobby Bellue, another rugby player at Berkeley and now the UC Santa Cruz rugby coach. And by the way, the  annual Garces barbeque is coming up October 7. Get your tickets now.

* ... WAYNE'S DAIRY: Reader Larry Woertz wrote to talk about Wayne's Dairy, "the No. 1 dairy in Bakersfield's home delivery days of long ago. "Having been a milk man back in the 1960s and 1970s I can say it was the best job I ever had. If you were going to have to work you might as well have fun and enjoy it. I also ended up marrying one of my customers and am still married to her." Woertz went on to say that Wayne's is having its 20th reunion at Hodel's on Saturday, Oct. 2, from 11 a.m. to 3 p.m. with lunch served at 1 p.m.

* ... SPOTTED: Middle-aged woman in late-model, metallic gray 3 Series BMW, aggressively weaving through traffic on Calloway Drive, blows through a red light at Brimhall and flips off a white Honda that dared honk its horn at her.

* ... BAKERSFIELDISM: You know you're a Bakersfield old-timer if "you saw Willie Mays play at Sam Lynn Park in a 'barnstormer' exhibition game and remember the name of the Bakersfield kid who stole the show. (Johnny Callison)"
Posted by Richard Beene at 11:59 AM

Sorry, Richard, but I must disagree. I believe you pick up after yourself, but no person should ever be made to pick up someone else's trash. If a school made my child (or my nephew, since I don't have kids) pick up someone else's trash, I would hit the roof. Now volunteering to pick up trash to keep the community looking good, that's fine, but forcing a child to clean up a mess that the child did not create, I would not allow that. I'm with the mom on this one.

Teaching kids that someone else will clean up the mess they leave behind? Not a good idea.

This is nothing wrong with making children aware of the litter problem. Perhaps if they cleaned up after others they would learn to clean up after themselves.

Isn't picking up children's school litter the kind of task we delegate out to illegals?

20th reunion for Wayne's Dairy? I thought that place was gone much longer than 20 years.