Remembering a local kid killed in Fresno and a bachelor auction raises $100,000 for homeless center

* ... CANCER: It was nice to read an inspirational story in The Huntsville (Ala.) Times about former Bakersfield resident Laura Brezinski's battle with breast cancer. She left Bakersfield five years ago when her husband Randy's job at Frito-Lay transferred him to Alabama. A year ago, during a self-exam she fund a small lump and underwent a successful lumpectomy. She is now recovering, doing fine and finished a 5K race. During this Breast Cancer Awareness month, it's nice to be reminded of the need to support cancer research. The Brezinski's three boys - Cody, Jake and Tommy - all went to Stockdale High School.

* ... GARCES DEATH: It was heart breaking to read about the death of Garces graduate Rod Fiorini, a 23-year-old Fresno Pacific University student who was shot and killed by Fresno police earlier this week. Whatever the circumstances, a death like this is always a blow to the extended and tight-knit Garces community, not to mention the young man's family. His mother, Pam Fiorini, is the energetic executive director of the Golden Empire Gleaners. Keep this family in your thoughts.

* ... MORE DIAPERS: From Bryan Kelly, the reader and Trader Joe's employee who wrote in to tell about finding a used diaper in a shoe box at Wal-Mart: "One must appreciate customers with a sense of humor. Although I personally do not subscribe to the Californian, rest assured that many people do and read your column as well. When you mentioned the Pamper-in-the-shoe-box story ...  I lost count of  how many customers mentioned seeing my infamous name in print, but I have received four shoe boxes full of 'treats.' Chocolate chip cookies wrapped in a dish towel folded like a diaper and secured with safety pins...chocolate chip cookies nestled in cent-off coupons for disposable diapers...Tootsie Rolls with a small container of PediaSure...a prune danish wrapped in a long sales receipt from Wal-Mart."

* ... BACHELOR AUCTION: Nice to hear of some successful non-profit fund raisers during these tough economic times. Jan Bans, external relations manager at ATT, told me more than 400 folks attended the recent 10th Annual Boots and Bachelor Auction that benefited the Bakersfield Homeless Center.  The event raised $99,563, a slight increase over last year. As Jan said: "Just goes to show if you give folks the chance to let loose, let off some steam they will open their pockets! We auctioned off 15 bachelors." The event was held at the Crystal Palace.

* ... THE MEEKS: Ran into Kay and Harold Meek at the 24th Street Cafe the other day. Kay was her usual gregarious self and brought me up to date on their retirement and her continued activity in the community. Harold was the long-time general manager of Three-Way Chevrolet who retired a couple years ago. Kay has been active in the community for years, serving on the board of the Kern County Fair, the Friends of Mercy Foundation, the Lori Brock Museum and the Kern Community College District, just to name a few. Her father was former Kern County Fire Chief Bob Williams, who died recently.

* ... RALPH UPDATE: Turns out that it is valley fever that is ailing Ralph Bailey, the popular host of "The Ralph Bailey Show" on 1560 news talk radio. Ralph has been in Mercy Hospital for three weeks now and it looks like he has a few more days ahead of him before he is released.  If you are new to town and are not familiar with valley fever, better consult your physician.

* ... SPOTTED. A video crew from the Food Network's syndicated cable show "Cupcake Wars" was seen earlier this week filming at the small boutique Frosting Ink over off 18th Street near the downtown Post Office. 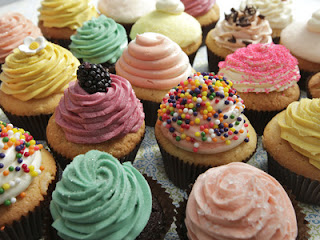 * ... BAKERSFIELDISM: From Frank Williams: You know you're from Bakersfield if "you remember when Woolgrower's was located on Sumner Street and you could eat lunch for $1.50 including all the wine you could drink."
Posted by Richard Beene at 10:27 AM