* ... TUITION: Students in the Cal State University system are in for another "fee" hike,  5 percent this school year and another 10 percent next year. We can all thank rising costs, a dysfunctional legislature and the recession for what is but another in a long string of fee hikes in both the Cal State UC systems. And, in a surrender to the obvious, Cal  State trustees will belatedly start using the term "tuition" instead of "fees" to bring the state schools in line with other colleges in the nation. All this is the inevitable and sad end to the Golden State's 1960s era promise of a "tuition free" education. Tuition in the Cal State system will rise to $4,884 a year while the UC system cost around $10,000 a year, excluding room, board, books and other expenses.

* ... LITTER CAMPAIGN: Happy to read that the city is about to launch an aggressive anti-littering campaign. Dianne Hoover, city and parks recreation director, told The Californian's Steven Mayer the campaign could include bus billboards, public service announcements and perhaps tougher fines for those who choose to use our  city as  their personal trash can. Of course it's shameful that we have to remind  people not to litter in the first place, but that's the way it is. Wouldn't it be nice if folks just took responsibility for their own trash? (photo of Dianne Hoover by Felix Adamo) 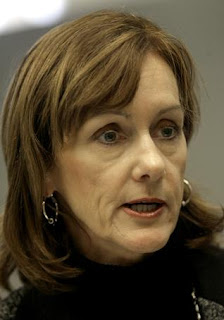 * ... OVERHEARD: A barista at a local Starbucks tells a customer about a drive-through patron who tried to hand off a used diaper through the window. At least she didn't leave it on the sidewalk.

* ... RUFENER'S: Reader Bobbie Hulson wrote to mourn the closing of Rufener's Alta Vista drug store, leaving only a handful of locally owned and operated drug stores left in town. "The story in today's paper about Rufener's closing mentioned that several people would prefer to deal with local private pharmacies. Is there any reason that you could not list the local private ones in Bakersfield Observed?  (Or at least list the ones you know about and ask Bako people to add the ones that they frequent.) We also feel the same way and have dealt with Gregg's on 34th and San Dimas  happily for many years. .... I know that there have to be a few more.  Thanks, Bobbie Hulson."

* ... KNOTTY PINE: How many of you remember the Knotty Pine Cafe? Joy Antonaros Rose does, and offers this interesting background: "I was so pleasantly surprised to read the contributing comments by Gene Bonas regarding 'having lunch at the Knotty Pine Cafe and playing the juke box from your table.'  The Knotty Pine Cafe was owned by our father, John Antonaros and his brother Nick Antonaros.  I have a wonderful old photo that is proudly displayed in my office of them in the Knotty Pine Cafe.  In fact, my brother, George Antonaros, and my sisters, Annette Antonaros Londquist and Madelyn Antonaros Jones and I still have the original records that were played in the juke boxes.  Many of those incredible records are still in their original jackets and we found them in boxes in our parents garage  Our father, John, passed away in November of 1999 but our mother, Bessie Antonaros, is still alive. Actually there is a tremendous ethnic history as our family was one of the founding settlers in Kern County's Greek Community and St. George Greek Orthodox Church . There is an interesting piece about our family in the book "Kern's Movers and Shakers" by Camille Gavin and Kathy Leverett. The Antonaros family has deep roots in our local community and a special thank you to Gene Bonas for remembering those days on Baker Street.
Thank you for 'Bakersfield Observed; as it is my favorite part of the paper!" Thanks for the kind words and for filling us in on the old  Knotty Pine.

* ... BAKERSFIELDISM: From reader Al Gutierrez: You know you're a Bakersfield old-timer  if "you remember standing at the corner of 19th and Baker Street when the 1952 earthquake toppled the Kern County Equipment Co. building."
Posted by Richard Beene at 1:03 PM

Wise Buys Drugs..corner of "H" and Brundage Lane....Tim Chapman is the owner and Pharmacist...they have been there for probably 30 years!