* ... AIR DISTRICT: More criticism for the Valley Air Pollution Control District. This time it comes from Stephen Montgomery, a retired railroad employee and former union legislative representative who worked to improve working conditions. He called the air board's move to shut down the Thanksgiving Day Pie Run bonfire "an overreaction to small potatoes. It's apparent they enforce the things that are easiest to enforce and in at least one case avoid messing with the ones that may be more difficult." He cited, in his capacity with the union, numerous letters he wrote - including one to the air district - to complain about hazardous dust at the Traver truck stop 30 miles south of Fresno. He said trucks are routinely driven off the road to an unpaved portion of railroad right of way "raising dust in the dry seasons. In wet conditions water runoff from the fuel dock aprons puddles up in this area and along with all the runoff containing fuel and brake dust soaks into the water table." In short, it's a mess and certainly creates more pollution, day in and day out, than a simple once-a-year bonfire at a public park. And what happened? According to Montgomery, absolutely nothing. (photo courtesy of Stephen Montgomery) 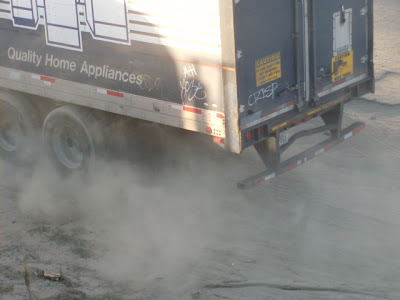 * ... THE BUZZ: The announcement that Jan Stuebbe will be stepping down as athletic director at Bakersfield College has some folks speculating that BC may look to Cal State Bakersfield for a successor. CSUB of course just named its new athletic director, Jeff Konya, and in so doing  passed over Roger Fessler, who was outgoing AD Rudy Carvajal's No. 2 person in the department. In fact, not only was Fessler passed over but he also wasn't given the courtesy to interview for the job, a slight that did not go unnoticed both inside and outside the campus. All this is speculation of course, but BC could do a lot worse than Fessler, who has deep roots in the community and who also spent time as athletic director at St. Francis University in Pennsylvania.


* ... MINIATURE GOLF: Reader Pam Mahan wrote to say she "had to laugh when I read Jimmie D. Hill's comment about the miniature golf course just north of Green Frog Market. I remember when I was playing there with a group of friends who included Arnold Kirschenmann. Arnold, who even at that time was a really good golfer, had a terrible round at the miniature course and proceeded to terrorize his golf club by bending it over his knee and throwing it into outer space. I don't know how Arnold's knee turned out, but it was a rough day for the golf club."

* ... MARATHON: Heard from reader Pat Chaffin who wanted to share the news that her sons, their wives and two grand daughters walked and ran 13 miles in the Zappo's Rock and Roll Las Vegas Marathon. "What a spectacle," she said. "Thirty two thousand competed and 18,000 were first timers. Many dressed in costumes and there must have been 50 Elvis impersonators... What's amazing is the majority of them are just ordinary working stiffs squeezing  in the time from their jobs and families to train for this race. Next year maybe they'll do the 26 miler!" The group includes Steve and Sara Chaffin, Doug and Connie Chaffin and Jenni Chaffin.

* ... RETIREMENT: Hats of to one of our city's most valuable and beloved employees who recently retired. That would be Louie Peralez, who retired after 42 years, serving most recently as the street superintendent. Mark Salvaggio, former city councilman, described Louie as "a city of Bakersfield institution. His service is second longest in the history of the city... He is the finest public servant one can find anywhere. His shoes will never be filed." Good luck, Louie.

* ... BAKERSFIELDISM: You know you're a Bakersfield old-timer if "you remember the long lines outside of Fontana's Pie Shop on Niles Street the day before Thanksgiving with people wanting fresh pumpkin or pecan pies." Thanks to Ken Barnes for this one.
Posted by Richard Beene at 12:13 PM

How about the mini golf course on Mt. Vernon where there is now a Sizzler?