* ... LUIGI'S WEST: Now here's some welcome news: Luigi's Delicatessen, the popular Italian eatery on 19th Street that has some of the best food in town not to mention a loyal following in the thousands,  is opening a second outlet at the Bakersfield Racquet Club. The club has been looking for a new restaurant manager to replace Big Popy's Deli, which is moving out at the end of this month. But no one expected Luigi's the fill the void. And, I am told that Darci Atkinson, a local caterer, has been hired to run the place for Gino Valpredo, one of Luigi's owners. This marriage of two Bakersfield institutions is a win-win for everyone: Luigi's gets a second location that is small enough to handle with ease, Atkinson gets a solid gig, the Racquet Club gets exposure to folks who would not otherwise visit, and Luigi's fans get a alternate venue for its famous half and half pasta and beans. 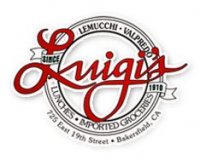 * ... CITIZENS ARREST: Everyone needs a neighbor like Wayne, a friend of mine who just happens to be a long-distance cyclist at peak fitness. He was returning to his Westpark neighborhood about 1 p.m. Sunday, with his bike in his truck, when he and his wife noticed two young men leaving their neighbor's home on a BMX bike, with a black garbage bag sitting on the handlebars. "My wife said 'that's not right' since our neighbors are not home," he said. After noticing his neighbor's gate was broken, Wayne quickly unloaded his bike from the truck and sped off after the young men. "I caught up to them about two blocks later and said 'you just left my neighbor's house. What's in the bag?'" The BMX rider then tried to race away from Wayne, a futile move under any circumstance. " I found incredibly funny ... (I) said 'is that really your plan? Because I can do this all day,'" he said. Finally realizing they couldn't shake Wayne, the lads dropped the bag, which was full of Christmas presents from the neighbor's home, and sped off. Wayne called the police and later identified one of the youths who "was a county (jail) guest at least for a night." Nice to have a Lance Armstrong-like neighbor there in the time of need.


* ... THE BUZZ: Meir Brown, owner of the popular restaurant Cafe Med over on Stockdale Highway, contacted me with this incredible story. "I thought you would be interested, last night a generous patron tipped one of my servers $5,000 on a $1,760 tab. When the server verified the intent with the patron he just said, 'Yes, Merry Christmas!' There are great generous people in our midst." Wow.

* ... WACKER TOWING: Robbie Horton of Mayflower, Arkansas, wrote to remember and recommend Tallywacker towing service. She said it was owned by Louie Tally and possibly Kenny Eggenberg, who still owns the property.

* ... SICK BAY: Californian columnist Herb Benham is recuperating from his hip surgery and doing well. He's happy to report that his surgeon remarked that he has "good bones," a comment that we no doubt will soon be reading about. Also Sending out best wishes to regular reader and contributor Jack Kelley who is recovering from knee replacement surgery. His wife, Sidney, tells me Jack entertains her by reciting "Bakersfieldisms" while they drive around town. "We'll be driving by somewhere and he'll say, 'I used to shoot pheasants right here,' pointing to the Jim Burke Ford lot on Oak Street."Get well, Jack.

* ... BAKERSFIELDISM: From reader John Martin: "You are truly a Bakersfield old timer if you remember ordering the Blue Plate business man's lunch ($1.29) at Martin's Malt Shop, on the corner of Baker and Lake Streets."
Posted by Richard Beene at 8:05 PM