Gaggles of ex cons put downtown residents on edge, and solving the mystery of the internment camps

* ... ANIMAL ABUSE: Am glad to see prosecutors going after the 43-year-old man accused of taking a golf club to a small dog and then spraying bleach into its eyes. It's a case of almost unimaginable cruelty, but things like this also bring out the best in our community. Folks at the Coffee Road Animal Hospital say they have been overwhelmed with donations to help the dog, named Lacey. And a rescue home has already stepped forward to care for Lacey, whose long-term prognosis remains uncertain. Meanwhile, prosecutors are filing felony animal cruelty charges against Robert Gonzales, the alleged abuser. 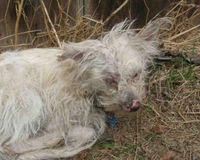 * ... GRAPEVINE: Larry Miller, a retired battalion commander with the Kern County Fire Department, wrote to recall the hot summer days before air conditioning when trucks would navigate the Grapevine. "I marveled at the truck drivers who would stand on the running board of their trucks trying to escape the hellish, mind-bending engine and pavement heat coming up through the floorboards of their rigs as they were creeping over the Grapevine at 10 miles per hour. With a brick propped on the accelerator to keep the rigs moving, they would reach through the open cab door with their right hand on the steering wheel while clinging to the open door frame with their left arm. No seat belts on those days."

* ... EX CONS: If you live or work downtown, you're accustomed to seeing groups of freshly paroled prisoners hanging out in front of the Greyhound Bus Station. They're unmistakable in their khaki pants, black slippers with no laces, white T-shirts and prison-issued manila envelopes. These are people who have served their time, but their presence has put some downtown business people on edge. Don Martin, the tireless advocate for downtown and himself owner of Metro Galleries on 19th Street, lives downtown and routinely enjoys his walk to and from work. But not always. He was outside the downtown Rite Aid the other day when he was "stopped by a guy saying he just got released from prison. He wanted me to fill a prescription for him. I told management at Rite Aid." The previous day, he was stopped on 19th Street by another man who also had just been released who was trying to sell him stamps. Martin politely declined. With the recession deepening and the state on the verge of releasing thousands more inmates because of overcrowding chances are this kind of thing will continue for a while. Meanwhile, Martin is one of a group of downtown business owners who have been working - unsuccessfully so far - to get the bus station moved.

* ... INTERNMENT CAMP:  I may have learned what happened to the couple who ran a produce stand in 1943 but were sent to a Japanese internment camp. A reader, who did not want her name published, said the name of the produce stand and market was Sogo's Produce, and it was owned an operated by Utaro and Koye Sogo and their son-in-law, Kingo Nakamoto. Their families, longtime Bakersfield residents, were relocated to Poston, Arizona where there was a Japanese internment camp. Apparently, according to this source, the business was turned over to the Lum family who successfully ran a produce business in town for many years. The produce stand was located at the intersection of Golden State Highway and Union Avenue.

* ... OVERHEARD: Reader Becky Williams: shared her encounter with a young lady at a local sandwich store recently.  "I'd like a turkey sandwich please,"  she said. The young lady replied, "I'm sorry. I can't make you a sandwich because our lettuce hasn't come yet."  Hold the lettuce then, Williams answered.  "I can't do that," the clerk said, "because I don't have any lettuce and it has to look like the picture."

* ... BAKERSFIELDISM: You know you're a Bakersfield old timer "if you've taken part in the soap box derby races held in the late 1930s on River Boulevard between Columbus and Greenlawn Cemetery." Thanks to F. Valentich for that one.
Posted by Richard Beene at 12:06 PM

And while you are at it, get rid of all of those tattoo shops and the jobless thugs that hang around outside all the day and night.

Mr. Gonzales should be hung himself. To do this to one of God's helpless creatures is a sin. I hope he rots in prison.