Is your dog or cat overweight? Chances are it is, and so are you. Time to shed a few pounds

OBESITY: As if it's not bad enough that most of us are carrying a few extra pounds, it now appears our pets are also facing an obesity epidemic. At least that's the conclusion of a Wall Street Journal story that noted more than half of all pets in the United States are now overweight or obese. "As more Americans confront their own weight issues, furry housemates increasingly struggle alongside them," it said. "The main culprit: owners who routinely overfeed pets, don't exercise them enough and are unaware of the severe, and costly, health problems caused by excess weight.  The story said if you have to dig around to feel your pet's ribs (I'm afraid I may be guilty here myself), your animal is too heavy.  (photo courtesy of the Wall Street Journal) 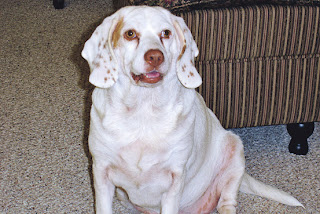 * ... WHITE TRIBUTE: More tributes to the late educator Paul White continue to come across my desk, once again showing how many people this teacher, principal and administrator touched during his life. Matthew Scrivano, who hails from Bakersfield but now lives in Springfield, Illinois, said he had never met Paul but has friends and family who did. "I had made plans in January to visit Bakersfield, and was excited to finally meet my eldest niece's boyfriend with whom she has been dating for a few years. Two days before my arrival, I see on Facebook a posting from my sister, informing everyone about the death of Paul White. I had no idea who she was talking about, but knew from her post and the numerous replies, Paul White must have been a very special and beloved person in Bakersfield. When I asked my sister who Paul White was, she told me he was a very dear longtime friend and a riding companion of both her and my brother.  If that wasn’t sad enough, Paul White is also the father of the Joe White, the young man whom my niece has been dating for several years. Not the type of introduction setting I had in mind. Upon finally meeting Joe, I now understand what a great father Paul had been and it shows in just what a great young man Joe is, and I am very sad I never had the opportunity to have meet Joe’s father." Matthew's sister is Margaret Patteson, who is coordinating the Paul White Memorial Ride this Saturday at Yokuts Park. Her daughter, Erin Patteson, is now, as of Valentine’s day,  engaged to Joe White.

* ... DID YOU KNOW: Did you know that Burleigh Smith, considered the father of local TV news in Bakersfield, left broadcasting when former Padre owner Milton "Spartacus" Miller was elected to the Board of Supervisors in the early 1970s? Spartacus asked Burleigh to be his district representative. Burleigh, who lived at the Padre during those years, returned to broadcasting at KERO-TV in 1973 when Spartacus left the Board.

* ... OVERHEARD: Two men at a Southwest area gas station talking about the unfolding drama in the Middle East. "It's fascinating to watch history but we're going to pay for it when gas hits $10 a gallon!" said one.

* ... UNION POWER: Keep your eye on the standoff between the Wisconsin governor and the public employee unions. This is a fight that will be played out across the country as we grapple with the long-tail effects of this long recession and government's inability to keep funding pensions and health care at current levels.
* ... BAKERSFIELDISM: From reader Janice Pelham: You know you lived in Oildale in the 1950s if "you watched your newspaper being delivered by a young man who tap danced up the drive way. I don't remember his name but boy could he dance!"
Posted by Richard Beene at 2:31 PM

Great blog, R. The story about Paul White made me weepy this morning with my coffee. He must have been a jewel. So sorry that his new daughter-in-law (to be) won't get to spend more time with him.