* ... GRAFFITI: Is there anything worse than waking up to see your home or business tagged with graffiti? It's a senseless and mindless act perpetrated by lost souls who could not care less about the impact of their behavior. Which is why the folks over at the Assistance League are so upset that their Q Street office was tagged this past Friday by someone who hit all four sides of the building. The Assistance League, of course, is an all volunteer group that provides clothing to needy school children. They work for free because they believe in their community and believe in helping those who cannot help themselves. Mike Stepanovich, whose wife Carol is a volunteer, summed it up by adding it was "sad that these ladies, who give so much back to our community and who are such an integral part of the local fabric, be treated so disrespectfully. Then again, there is nothing respectable about taggers." 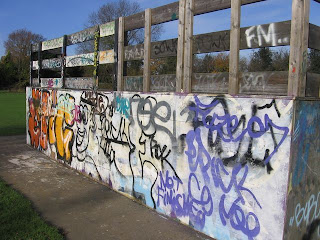 * ... SMALL WORLD: Reader Glen Worrell read with interest my earlier post about tennis great Dennis Ralston, who is recovering from surgery to amputate his left food. "His mom was my health teacher at Washington Jr. High in 1944 when it was located on Baker Street. Later she was my 'next door neighbor' when we were both teaching at Emerson Jr. High. And ... your faithful reader Gene Bonas also taught seventh grade for me at Sunset School (Vineland School District)."

* ... PAUL WHITE  : If you ever doubt your ability to influence others, you may want to consider the life of Paul White, who died Tuesday of a massive heart attack while riding his bike on Round Mountain Road. White was just 64 years old but was a positive influence on thousands of lives during his long career at the Panama Buena Vista Union School District. The outpouring of love for this man has been impressive, with dozens of former students (he was a principal at Sandrini Elementary) expressing their loss on social networking sites like Facebook. Others, like Loretta Pedroza, contacted me with similar sentiments. "I have known Paul for 27 years. I was parent club president at Sandrini Schoool when he was principal and he later hired me to work as a Title 1 Aide for the district at Sandrini, where I still work. He was a great man and he was always there to help you when you needed it. He did a great job at everything he did. He will be greatly missed by all." A memorial service will be held Friday at 4 p.m. at St. Francis Church. 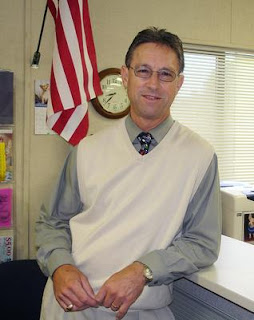 * ... PADRE: Ran into Brett Miller, owner of The Padre Hotel, the other day. The Brimstone bar room was full, the Belvedere restaurant was busy and best of all: the hotel was sold out. Turns out the World AgDay Expo in Tulare was a big draw for the local hotel all week, and I suspect other Bakersfield inns also benefited from the annual agriculture exposition. 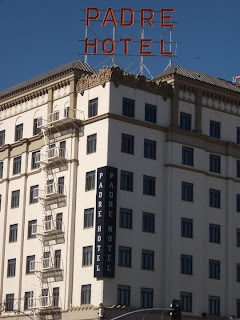 * ... STEVIE WONDER: Reader Judi Anderson Gahagan, a 1963 graduate of North High, wrote to say she remembered the dances at the Armory where she saw "a young, skinny Stevie Wonder (March Meets dance) at the Lake Ming dances that were such fun time. We also had dances at the Veteran's Hall on Norris Road. I am wondering if any kids from the late 1940s or early 1950s remember the carnival by the river, close to where the Heart Hospital is now? Fun times. I enjoy your column."

* ... BAKERSFIELDISM: From reader Larry Miller: You know you're a Bakersfield old timer "if you remember the comic strip Rick O'Shay starring the gunfighter Hipshot Percussion and his cat Belle Starr. Lord, I miss him!"
Posted by Richard Beene at 10:47 AM

So sorry to hear about the tagging- bitter, impoverished souls striking out, unaware that they are striking out against the very folks trying to find them a better way to live. I hope the ladies are able to get it cleaned up quickly and not take it to heart, and that the young people involved with have a change of heart and feel some shame for their actions.