How about naming a school after "Mr. Education" Larry Reider? And don't forget about First Friday

* ... REIDER: The Bakersfield City School District is accepting suggestions for naming two schools that will open in 2013. One name that comes to mind is Larry Reider, the wildly popular superintendent of Kern County Schools who retired in 2009 after a 40-year career in education. Reider spent the last 10 years as county superintendent, succeeding Kelly Blanton and guiding the department through a perilous economic period. Blanton had gone on an expansion spree, and it was left to Reider to refocus on the core mission when the recession hit. His long, dedicated career and the fact that he has been (and continues to be) involved in about every community non-profit there is, should qualify him for this honor. The naming involves a future elementary and middle school set to open in 2013 near the former Mesa Marin Raceway. If anyone deserves this honor, it's "Mr. Education" Larry Reider. 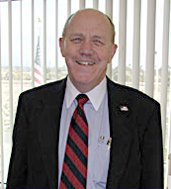 * ... BLOOMFIELD'S: A recent post on Bloomfield's Drive-in triggered an email from Greg Harrison, the grandson of the couple that owned the diner, Gene and Marie Bloomfield. "My mom (Margorie) met my father at Bloomfield's. He had just arrived from Oklahoma and within hours went to Bloomfield's for a meal, saw my mom and said to his friend that he was going to marry that girl. The next thing she knows, they eloped to Las Vegas and were married for 57 years. Both are deceased now."  Harrison said his grandfather, an engineer for Southern Pacific Railroad, was the person who discovered the body of  former Chief Justice Earl Warren's father behind the drive-in. That murder remains unsolved to this day. He said there was a second location for Bloomfield's in the late 1930s and early 1940s on Monterey Street that later became a Sparkle Cleaners. The original Bloomfield's Drive-in was at the northeast corner of Niles and Baker streets.

* ... MORE DINERS: Speaking of Bloomfield's, several readers have written to say that I am mistaken and that it was a drive-in called Hall's that was at that exact same corner. In fact reader Ann Neville told me it was her father, Howard Fifield, who was a co-owner of Hall's at the northeast corner of Baker and Niles streets. Perhaps, she said, Bloomfield's occupied the building before it was Hall's. Anybody remember? Either way, she said Hall's was "a hangout for the teenagers until Stan's opened on Union Avenue. Unfortunately the kids flocked to the new place. I spent many hours tray hopping at 75 cents an hour for my dad. Great memories!"

* ... SMALL MIRACLES: So nice to hear that more than $212,000 was raised recently for two deserving groups: Angioma Alliance and the Small Miracles Foundation. The alliance focuses on an illness called cavernous angiomas and the foundation helps families whose children are suffering from cancer. Local resident Liz Newman wrote to say that cavernous angiomas is characterized by lesions that grow and bleed in the brain. Her own son Jake had brain surgery at age 2 and her other son Sam has had four brain surgeries to remove hemorrhaging cavernous angiomas. The Small Miracles Foundation was started in memory of Lauren Small, who died of cancer in 2005 at the age of 11. "What I want you to know about this evening Mr. Beene," she wrote, "is that it stands as a true testament to the generosity of the people of Bakersfield. The auction raised $205,000 with only 22 auction items offer. Simply amazing." The event was held at Bakersfield Country Club and featured Madorom Vineyards of Napa Valley, which holds a release party of its current vintage each year in Bakersfield.


* ... FIRST FRIDAY: It promises to be a good weekend to head downtown for First Friday. The stunning photography of Peter Fay will be on display at Metro Galleries on 19th Street. Enjoy the photographs while listening to Kama Ruby and munching on snacks provided by Mama Roomba. Meanwhile, the Bakersfield Art Association will have an exhibit called "Shoes/Zapatos" featuring paintings and one sculpture by 24 adult artists and five younger artists. Music and refreshments will be served from 6 p.m. to 8 p.m. The Art Center is located at 1817 Eye Street. (photograph by Peter Fay below)

* ... BAKERSFIELDISM: You know you're from Bakersfield if you remember the Blackboard bar and the chicken wire that was put up to keep customers from throwing beer bottles at the band.