* ... CSUB TURMOIL: As if Cal State Bakersfield didn't have enough to worry about with a shrinking budget and layoffs, President Horace Mitchell is dealing with more complaints from alumni and supporters about Beverly Byl, the vice president for advancement. Byl joined the campus some three years ago to head the office in charge of fund raising and community development, but her dictatorial style has never set well with some of the more prominent members of the community or her staff. Last week, it all came to a head when the outgoing chair of the CSUB Foundation, Geoff King, called for Byl to be replaced. I am told that King, who is a partner in the accounting firm of Barbich, Hooper and King and himself a CSUB alum, spared no words in telling the Foundation board (President Mitchell and Byl were in attendance) that a change was "sorely needed" in University Advancement. King prefaced his remarks praising so many other positive things going on at the university, but he reflected a widespread view that Byl has squandered her time here failing to successfully build strong bridges with the community to raise money. This should come as no surprise to anyone close to the university, including Mitchell, who has heard all this before from a series of prominent Foundation members. And while Mitchell himself remains popular, many wonder why he has turned a deaf ear to these complaints and Byl's divisive attitude that has alienated her own co-workers and members of the community. Mitchell told me he respected King's opinion "but it's his opinion."

* ... MORE CSUB: There's no doubt campuses like CSUB are in a squeeze, and President Mitchell is having to make some tough calls to balance the budget. Four ranking administrators were laid off this week, and other positions have gone unfilled. But what about the compensation of Mitchell, Byl and others at the top? In the private sector it's not unusual for presidents and ranking executives to take pay cuts themselves - full disclosure here: at The Californian all senior executives, including me, have taken multiple pay cuts and watched their bonuses be eliminated - so I posed that question to Mitchell. He said that's a decision that can only be made by the CSU system level, and CSUB spokesman Rob Meszaros noted that while no one has taken a pay cut at CSUB, there also haven't been raises since 2007. But with other folks losing their jobs, it seems to me like this might be something to consider.

* ... OLD GLORY: Is your American flag starting to wear and tear? If so, you may want to drop by Goin Postal over off Brimhall Road where owners Joel and Gary Young are once again giving away new flags in exchange for your old flag. This generous offer will run through July 4th. The retail package shipping office recently presented 150 flags to blood donors at Houchin Blood Bank during its salute to the military. Goin Postal is located at 11000 Brimhall Road, Suite E.


* ... SICK BAY: There was a nasty crash involving seven bicyclists Thursday morning on Granite Road when a pickup truck attempted to pass on a curve and brushed one of the riders when he faced an oncoming car. Greg Walker, a construction project manager, was taken to Kern Medical Center where he was treated for major road rash but no broken bones. There were about 15 cyclists in the group when the truck apparently brushed Walker, forcing him to fall and trigging the massive pileup on the road. Among the other riders who crashed were physical therapist David Rous, Stockdale Elementary principal M.T. Merickel, pharmaceutical reps Curt Pierce and Adam Hensley, State Farm employee Richard Picarelli and Bike Bakersfield's Zach Griffin. Please remember to share the road with cyclists. 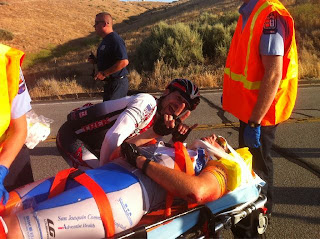 Oh dear. Please remind bicyclists to ride single file. I notice so often bicyclists spread across the road to enjoy each other's company. Too risky cyclists. No matter who is at fault, being hit by a car is going to hurt.

I have no horse in this race, but my sympathies for Byl are aroused by the lousy reporting and lack of balance -citing "insiders", "a widespread view", and unnamed "prominent foundation members" for the "dictatorial", "paranoid", and "divisive" charges. What's the other side of the story? If I were Byl I'd sue you for defamation of character.