* ... COLLEGE GRADS: With the national unemployment rate stalled north of 9 percent (and much higher locally) it's a bad time to be graduating from college and looking for work. But it appears some majors are doing better than others. According to Reuters, kids graduating with degrees in accounting, finance, economics, marketing, human resources or information technology have the best chances of finding work in a tough economy. The worst chances: students with degrees in the liberal arts (English, literature, communications etc). And for those who do find work, Reuters said the entry level salaries are now $10,000 less than they were just two years ago. 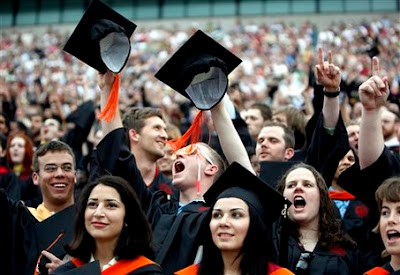 * .. MORTGAGE RATES: Even though the prices of some homes may sink further over the next six months, there's a convincing argument to buy now. Why? Mortgage rates only have one way to go, and that is up. Mona Marimow, senior vice president for LendingTree, a loan comparison website, told USA Today that consumers "might look back on this period six months from now and regret it if they didn't take action." Nobody is more aware of this than local Realtors, who say these rock bottom mortgage rates along with slumping prices make it an ideal time to jump into the market.

* ... CREDIT CARD FRAUD: Seems I am not alone in having my credit cards hit with fraudulent charges. One reader, who asked to be identified by her first name Victoria, wrote to say she used her American Express card to pay for a recent cruise on Carnival Cruise Lines last year (she rarely uses the card) and then used her Visa to pay for charges on the ship. "About a week after I got back I started getting fraud charges on both cards out of Florida. I knew it had to have come from Carnival because no one else had both credit card numbers and no one (except Costco) should have my America Express Card number. I called Carnival right away to let them know someone in their company was stealing numbers as it could have only happened through them. I really don’t think they really cared, as they took my number and no one ever called back." Another friend, who works for a local water district, told me he just discovered $450 worth of fraudulent charges from Miami on one of his cards.

* ... SHERYL CROW: In an earlier post on the Sheryl Crow concert last week I neglected to mention that the singer also singled out visiting "In Your Wildest Dreams," the costume and curiosity shop located across from the Padre Hotel. Reader Charlie Wilmot reminded me that the owner, Dixie Haley Brewer, is a North High graduate who regularly participates in charitable events. "I religiously read your Californian blog and especially enjoy your mention of local people and their  businesses," he said. "The Californian readers should also know that 'In Your Wildest Dreams' is much more than an antique store and they are daily donating to various local charities."

* ... WHO KNEW?  Did you know that every Friday night during the summer, a free movie is shown in a city park? Sometimes, you can even float in the parks’ pools while enjoying the film.

* ... BAKERSFIELDISM: You know you're a Bakersfield old timer if you remember "drag racing on Buena Vista Road south of the railroad tracks toward Panama Lane."