* ... OIL PATCH: Local oil producers are up in arms over what they see as state regulations that are putting a lid on new oil drilling in Kern County. As reported earlier by Californian energy reporter John Cox, the producers are fuming that the regulations - some of which are caused by environmental concerns - are slowing production at the very time that it should be increasing. Dave Kilpatrick, a longtime oil executive and former head of the local independent petroleum association, was in town Tuesday for a meeting with both independent producers and representatives from the big oil companies to raise awareness of the issue. "We have fields with 10,000 wells where we can't drill a new well," he said. "It's absurd." In the cross hairs of the producers is Elena Miller, a lawyer who is supervisor of the state division of oil and gas, who they accuse of "overkill" in implementing new regulations. This is an issue that is not going away and comes at a time when producers argue that domestic oil production should be increasing, not decreasing. Stay tuned. 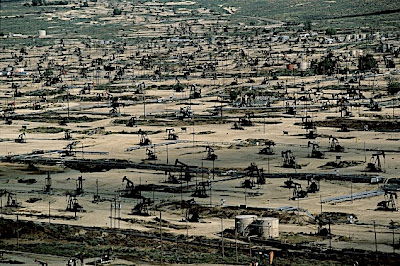 * ... BONNIE'S BEST: I stopped in the new, second location of Bonnie's Best the other day and had a nice chat with co-ower Katie Watson. Located at 19th and O streets, the new Bonnie's is a lovely little deli with indoor seating, an outdoor patio and a lively and friendly decor, not to mention an impressive lineup of sandwiches. Katie's partner is mother Laurie Watson, owner of the original Bonnie's Best at F and 21st streets, and the two hope the revival of downtown and the Mill Creek area will afford the new location the success of the original shop. You have to admire these entrepreneurs who put their own capital on the line, in a bad economy, when so many others are holdling back.

* ... HOARDERS: I have enough problems with one gray tabby cat, so the idea of animal hording is not something that has ever appealed to me. But it's out there, and now comes word that a local psychologist, Dr. Corey Gonzeles, will be appearing on the cable TV show "Confessions: Animal Hording" to provide some advice. The Animal Planet show airs Wednesday evenings and portrays the human condition that affects people and their animals. Apparently this is the third season in which Dr. Gonzales has appeared on the show. For all you hoarders, tune in for some free advice.

* ... CLASS CRUNCH: School is back in session and for many teachers, it will be a much more difficult year in the classroom. Why? Budget cuts eliminated hundreds of teacher aide positions that provided valuable backup in classes that typically have 30 or more students. Teachers rely on these aides to help maintain order in the classroom as well as to give equal attention to the slow learners, as well as the stars. But they were the first to go in districts that have been forced to make drastic cuts in the face of budget shortfalls.

* ... MEA CULPA: I misspelled the name Arnold Johansen in a recent blog about his collection of classic Gar-Wood boats. Johansen is CEO of Holloway Gypsum Mining Co.

* ... BAKERSFIELDISM: Geraldine Sproul is a product of Standard School in the early 1950s and remembers the old Bertha P. Elliot Hall. A number of women's clubs met there, including the North of the River Women's Club and - if she recalls correctly - it hosted the first meeting of St. Mark's Methodist Church before its new building was constructed on Oildale Drive. "I don't know what name is on the building now, but it is the building on the south side of the brick building at the corner of North Chester and Woodrow Avenue. This is where the underpass from Standard School comes up. Wish I had a nickel for every time I went through the underpass!"
Posted by Richard Beene at 2:29 PM