Gov. Brown signs into law a Rubio-sponsored bill to speed renewable energy projects, and a reunion at East High

* ... GREEN LAW: Gov. Jerry Brown signed into a law Thursday that expedites the process fore reviewing and issuing permits for renewable energy projects within the Department of Fish and Game. The sponsor of the bill, state Sen. Michael Rubio, was on hand to witness Brown sign the bill during a brief ceremony in Fresno. He called it "critical" legislation to speed the permitting process. Meanwhile, Rubio is busy raising money for his run in the newly created 21st Congressional District, where Republican Fresno farmer David Valadao - a state Assemblyman - is also running. This should be a spirited race and one worth following. (file photo below of Michael Rubio) 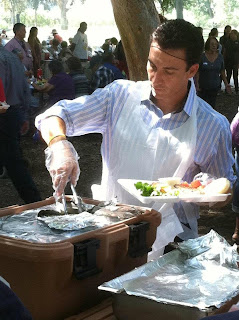 * ... HAPPY TRAILS: A large group of KBAK 29 employees gathered at the Prairie Fire bar at The Padre Hotel recently to celebrate the retirement of longtime employee Nancy Clarke. She retired after 32 years at KBAK and - as her coworkers told her - hardly looks 32 herself. She kept FCC reports for KBAK and directed and purchased programming for both KBAK and KBFX.

* ... EAST HIGH: East Bakersfield High School is looking for alumni to participate in video interviews about their time at the school. Karen Roney says it's all part of gearing up for the school's 75th anniversary. "If you have memories to share about experiences and/or favorite teachers please call Rick Van Horne at EBHS (661) 871-7221 to schedule an appointment time. Video interviews will be done on Monday, October 3 from 9 am until 3:30 pm in the Administration building.

* ... SPOTTED: Able bodied, 30-something blonde, dressed to the nines and driving a shiny black BMW, pulls into a handicapped parking space at The Marketplace. When confronted by another woman, the blonde curtly responds "I'll only be a minute" and then flips the woman off. Such class.

* ... MEMORY LANE: Another walk down memory lane, thanks to Victoria Brewer Sexton. She recalled the retailer Harold Brewer Women's Wear, Inc., located on the corner of F and 28th streets. (One reader had identified it as Harold Brown's) "Rosemary's occupies that building now and has for many years. Harold Brewer was my father and he started his specialty clothing business in 1954 and closed the doors in 1967.... I also have fond memories of the Carnation Company with its ice cream soda shop in front on Union Avenue. The Union Avenue Plunge was a treat for me, and that was a high tower we jumped off. The Terrace Drive-in was a high school memory."

* ... GOOD SERVICE: Reader Joe House added these thoughts about good service around town: "Bright House Networks. When I call I get someone from Bakersfield not India, and if they can`t take care of it over the phone they will send a service tech out quickly even on weekends. Also Memorial Hospital gave my wife the best of care."
Posted by Richard Beene at 2:26 PM