* ...HARLEY'S RUN: Longtime community leader and petroleum attorney Harley Pinson has entered the race for the Fourth District seat on the Kern County Board of Supervisors. I've known Harley for years and we are fortunate to attract quality people like him who are willing to serve. He's a graduate of UC Santa Barbara and the McGeorge School of law and a longtime volunteer in many community causes. Harley told me he already has picked up the support of some impressive local folks, including Ray Dezember, former Aera CEO Gene Voiland, former Mayor Mary Kay Shell, insurance consultant John Pryor, Bryan Batey and Taft Mayor Randy Miller. His wife, Cindy, is also a graduate of UC Santa Barbara. They've lived here for more than 30 years and have two grown children. The post opened after the retirement of Supervisor Ray Watson.

* ... CAL RADIO: I'll be chatting with supervisor candidate Harley Pinson Monday on Californian Radio SmartTalk 1230 at 10 a.m. He'll be laying out his goals and expectations as he joins the race to succeed Supervisor Ray Watson. Later in the hour, I'll talk to local writer Lisa Kimble Edmonston about bad manners and what we can all do about it.

* ... TRIATHLON: Hats off to Kerry Ryan and the folks over at Action Sports for putting on another successful Bakersfield Triathlon. I headed out to Lake Ming Sunday morning to watch the runners and cyclists come in, and was pleased to see a huge turnout of families and spectators. And of course, it's always nice to see large crowds of peole who take their health and wellness seriously. Ryan said he had about 200 entrants.

* ... REPORT CARD: Bakersfield received the grade of a D minus in report listing the most, and least, educated cities in America. We ranked 81st on the list, which was assembled by Men's Health magazine. The magazine used graduation rates, school enrollment and education levels for adults over the age of 25 in compiling the list. The most educated city in the country? Madison, Wisconson, followed by Plano, Texas, and Raleigh, N.C. Houston was right behind Bakersfield at No. 82. 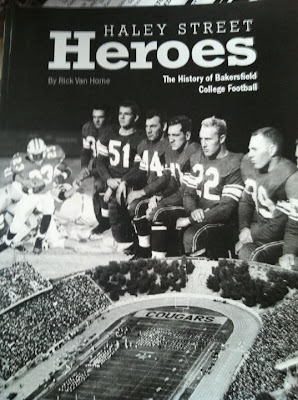 * ... BAKO TO BALBOA: This note from Pat Toon Harrison popped up in my mailbox: "What a pleasant surprise when I received your article, written by Linda Smith, about my father's music store. I am the 80 year old daughter of Jack Toon. He was in the music business fron 1934 until he sold sometime in the early 1950s.My good friends, Larry and Glenda Verdin, sent the article to me. Our family moved to Balboa (Newport Beach) in 1952, but I have stayed in touch with several Bakersfied High friends from the 1948 class. Bakersfied is truly a town of special people!

* ... BAKERSFIELDISM: Harvey Brockmeyer, a retired Bakersfield High agriculture teacher, says you may really be an old timer if you remember the school farm out on old Stine road. The area is now a gated community but Brockmeyer says residents still use the bridge on Stine Road as its entrance. "The slightly undulating farm land farther west was an ideal spot for BHS's agriculture class to use for its unit on survey and leveling. Still further to the west is now West High School; f ew know that this fine school rose out of the ashes of Bakersfield High's old school farm's  trash heap!"
Posted by Richard Beene at 11:49 AM