* .... EDIBLE SCHOOLYARD: You really have to hand it to the Grimm Family Education Foundation for its support and creation of the edible schoolyard at Buena Vista Elementary School. In a time when obesity and diabetes seem to be the norm, the Grimm family funded the creation of a garden and special classroom to teach young children about the value of integrating fresh fruits and vegetables into their diets. Alice Waters, a pioneer in the philosophy of using the freshest locally grown ingredients (and the owner of the famous Chez Panisse restaurant in Berkeley), was at Buena Vista school last week for the grand opening. Among those attending were Bitsy and Garrett Ming, Erin and Sean McNally, Kay and Harold Meek, Sue and Herb Benham, Mary and Greg Bynum, Dinah and Jeff Mettler and many others. Hats off to the Grimm family for supporting such a worthy cause. (file photo of Alice Waters) 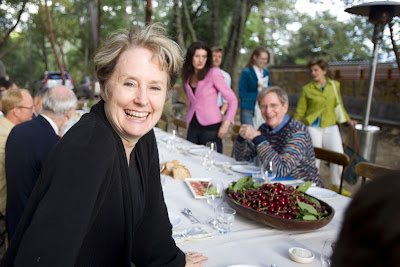 * ... RIP CHET: Bakersfield lost one of its truly great citizens with the passing of Chet Love, a retired oil executive who was deeply rooted in our community. Chet passed away while visiting his mother in Witchita, Kansas, and is preceded in death by his wife of 51 years Mary Lou, who died last year. He was active in the Rotary Club of Bakersfield and the First United Methodist Church and was one of the nicest and kindest men around town. He was 76.

* ... CARD FRAUD: KERO TV anchor Jackie Parks Karli dropped me a note about her own experience with credit card fraud, and this one is a doozy. Said Jackie: "Our card was scammed to the tune of almost $13,000 in a single charge at a farm supply store in Colorado. The woman was from Indonesia and had even had a Visa card made with our number but her picture on it. It took months to clear up. That was two years ago and we've had to cancel our card twice since due to other fraud." Ouch. (file photo  of Jackie Parks Karli) 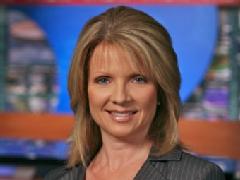 * ... CAR THEFTS: Linda Parker, executive director of the Kern Wind Energy Association, wrote to warn about a rash of car thefts in the Southwest. Her teenage daughter's car was stolen, and she knows of many others in the Southwest and Silver Creek area. "We work hard to provide for our family and to have someone come in and violated our space is very disturbing, not to men our daughter's emotions of not having her car," she said. "Car thefts just are not a priority when the police are tapped out on violent crimes. All you can do is report it and sit and wait for a call from the BPD and that is only if they find it!"

* ... HISTORY: Reader Pat Mahan needs some help with a history question. "There was a restaurant and motel/hotel that was up on the Ridge Route back in the 1940s or 1950s. It was frequented by movie stars and the Hollywood elite. Stories were that is where many of the male stars brought their girlfriends. Can you or any of your readers help me out?"

* ... PUMPKINS: If you're in the market for a pumpkin - and it is that time of year - check out a sale on Saturday, October 22, behind the Roadhouse Grill at the Northwest Promenade Shopping Center. This one will support local Cub Scout Pack 177, and is there a more worthy cause than our Scouts? It will run from 8 a.m. to 3 p.m.

* ... BAD FORM: Another example of bad behavior submitted by reader Mona Martin: "I observed a Hispanic male in a 2008 black BMW in northeast Bakersfield cut a woman in a red Dodge truck off and then block her at a green left turn while flipping his finger at her. Just because your car is classy doesn't mean it transfers to the driver and occupants! Also, my son's debit card was hacked into a day after he bought gas at a convenience store gas pump. So important to check your bank accounts daily, as he does! The charges were all local and all of them blocked due to his daily diligence."
Posted by Richard Beene at 2:26 PM

Just wondering why it was important to mention he was Hispanic? I've witnessed bad driving behavior by many people - from all races and ethnicities - as well as from both genders. Being Hispanic in and of itself has nothing to do with it.