Readers weigh in on the historic old Lebec Hotel, a once proud landmark that house Clark Gable and other celebrities

* ... LEBEC HOTEL: Many thanks to the dozens of callers and readers who responded to the question about the old hotel on the Grapevine that was a favorite of Hollywood celebrities. It was called the Lebec Hotel, and according to a Santa Clarity Valley historical society, it was built in 1921 in the style of a French chateau and torched in 1971 by the Tejon Ranch Company after falling into disrepair. A rich part of our local history, I heard from more than 40 readers about the old hotel. Here is a sampling of what I learned:
+ Jack Kelley said the original hotel, named the Durant, opened on May 21, 1921, and changed names before settling on The Lebec Hotel.
+ Joey LeBrun said he lived in Lebec in the 1950s and at the time, the Lebec Hotel was run by the Burke family. He remembered the "enormous ballroom that felt like a palace. My mother met Clark Cable and Carole Lombard there."
+ Carol Dokolas says her husband also remembers the ballroom and seeing acts like the Dixie Darling and Al Hart and Harry James and his orchestra.
+ Karen Noriega said her grandmother, Claire Miller, was a maid at the hotel. "She also was a waitress at the Lebec Coffee Shop. My grandfather, George Miller Sr.,  ran the Lebec garage."
+ Reader Ed Davis said he too remembers the hotel and "unfortunately, as a young guy, I stole bathtubs out of the north wing when the building was starting to degrade!" He used the tubs as watering troughs for cows and horses on his uncle's ranch.
+ Shirley Walton said her husband worked on the crew that torn the old place town, and the family salvaged a chest of drawers that her son, Mike, took to UCLA where it lived in a fraternity house.
+ Stephen Montgomery said in the 1960s some "well intended owner tried to operate it by renaming it the Nu Motel. Well, sticking the name Nu on it didn't make it 'nu.' It was still an aging and neglected facility and after it was abandoned in the 1970s, the county "ordered it closed or upgraded. The fire department used it for fire practice and we lost an attractive and historic facility."
+ Superior Court Judge Thomas Clark said  his parents spent their honeymoon there, and that the actors Robert Stack and Clark Gable often stayed there while duck hunting.
+ Barry Zoeller, communication vice president for Tejon Ranch,  said the hotel "was located on the west side of Interstate 5 almost directly across from the Kern County Fire Station in Lebec. You can still see the tall Cypress trees that were at the front of the hotel."
+ Reader Thomas Jannino said his parents married in Pasadena in 1939 and spent their honeymoon night at the hotel. "They were on their way to the World's Fair in San Francisco. I can remember passing the structure as a child. The building was somewhat Mission-like in style, isolated from surrounding structures. Obviously, they could have never made it to the Bay area by bedtime."
+ Marilyn Scott remembers driving by the hotel many times and once stopped in the parking lot to take a closer look. "I wish I had taken the time to go inside but I had two small children with me and was in a hurry. Next time never came."
+ Lastly, Larry Miller was with the Kern County Fire Department and was in charge of burning the hotel at the request of Tejon Ranch. "Bull dozers and skip loaders completed debris removal and the project was completed in less than 24 hours, an ignominious end to what was once a storied, beautiful building."
(photos courtesy of a Santa Clarita Valley historical organization) 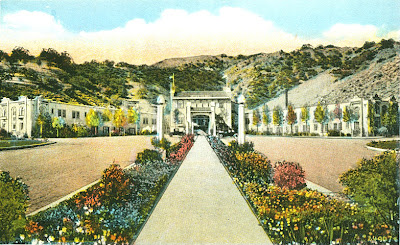 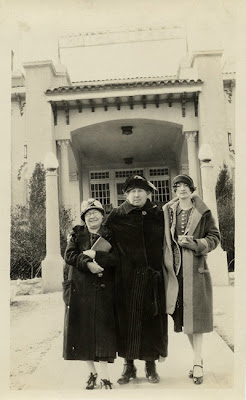 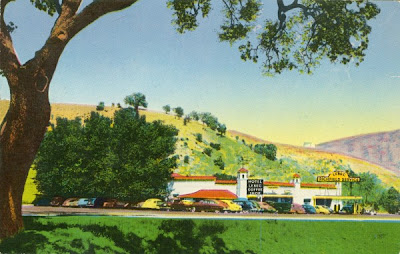 * ... MORE FRAUD: My in box is full of stories on folks who have seen their credit cards compromised. The latest is from Brett and Cheryl Hurt. Said Cheryl: "We have had our numbers stolen and credit cards reissued twice within three months! We were getting ready to go to South America so we notified Bank of America and gave them our itinerary and dates. It must have been skimmed at a gas station but we had over $3,000 worth of charges to Wal-Mart in Nevada. Come on, Wal-Mart? At least make it Nordstrom's."

* ... SPOTTED. This comes from a man who asked to remain anonymous. "A couple days ago, standing in an adjacent checkout line at a local big box store, a mother pulled in line at the next checkout with her young son sleeping in a cart on some thick towels and her groceries in another cart. After unloading the groceries on the stand, with no intention of buying the towels, she yanks them out from under the child and plops them in a pile on top of a soda cooler at the checkout stand. She left the now used towels that the kid, who was probably sick, slobbered on for the store to reshelve for some other unsuspecting customer. Tacky, selfish, unsanitary and really just plain theft."

* ... BAKERSFIELDISM:  Mel Minney writes that you may be a Bakersfield old timer "if you remember Tote Sack Annie."
Posted by Richard Beene at 11:12 AM

Lebec Hotel... Kern County(and Bakersfield)has a knack for tearing down landmarks. They just get in the way of progress.

I still grieve when I sometimes think of that beautiful Hotel in it's beautiful setting. But unless one is willing to (or can) finance it's refurbishing there is no one to blame,as a building uninhibited becomes a danger and an eye sore.