* ... PAROLEES: The state mandated plan to release thousands of non violent offenders while transferring even more prisoners to local county jails has law enforcement officials across the state on edge. No one is exactly sure how many parolees and prisoners will end up in Kern County, but it will certainly put a huge new burden on local police and parole officers. In Los Angeles, police are warning that more than 150 officers will be removed from street duty to deal with the influx of prisoners. And they are bluntly predicting there could be 3,000 more serious crimes committed by ex convicts walking the streets. (photo by the San Francisco Sentinel) 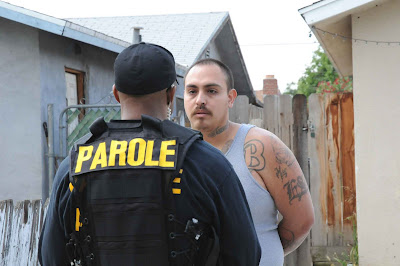 * ...  FRAUD: My primary ATM card was hit with fraudulent charges once again, the fourth time in three months that my credit and ATM cards had to be canceled and reissued. This time, charges popped up at two Walmarts in the Los Angeles area. Amazing to me how many people I meet who have had similar problems. How many of who have encountered something similar?

* ... SPOTTED: Occupants of a 2008 black BMW toss all their trash out the window before leaving the Taco Bell parking lot at Buena Vista Road across from Stockdale High School.

* ... RILEY'S JOURNEY: Old friend Riley Parker checked in with me on his journey back to good health. He's been cycling since being told by his doctor that he had better get a grip on his health or wind up a diabetic. He recently posted a personal record with a 25-mile ride, but said he could not have done it without the help of Realtor John Garone, whom he met on the bike path. "He said hello and kind of cheered me on. When I got to the turn around at Enos Lane, John was there and we chatted for a few minutes. I am so happy that I made the decision to go this route rather than allow my health to completely crater." Well done, Riley. Keep us posted.

* ... FUND RAISER: Phil Icardo shot me a note to let me know that 9th annual Elegant Evening of Wine benefiting the Joe Alexander Scholarship Foundation was another huge success. "The new venue, Mark and Sue Ashley's Westchester home, provided a truly elegant atmosphere," he said. "This year's event was the most highly attended in its history with the proceeds assisting the very needed educational and vocational scholarships." Well done.

* ... MEA CULPA: I erred on Monday in implying (via poor verbage) that Mike Maggard was a Bakersfield City Councilman. He is of course on the Kern County Board of Supervisors serving the 3rd District. Also, the Fourth District supervisor candidate I mentioned is Michael Rouw. I could blame it on too much sun after a week on a Mexican beach but that would be bad form. Mea culpa.

* ... HOME SWEET HOME: Speaking of my vacation, no matter how much fun you had it's always nice to come home. Some of my favorite things about returning to Bakersfield: enjoying the taste of fall in the air and seeing the elegant and stately old Guild House, checking in with my favorite baristas at the 24th Street Starbucks, taking a leisurely bike ride over Round Mountain, having a Sunday snack at The Padre Hotel and reuniting with my husky house companion, the gray tabby Latte.
Posted by Richard Beene at 3:28 PM