* ... BUCK: The Country Music Hall of Fame in Nashville is opening a new exhibit dedicated to the late Buck Owens, Merle Haggard and others who helped create the 'Bakersfield Sound.' The exhibit opens March 24 and will run for two years. Said CMT: "Narrated by Dwight Yoakam, the exhibit will explore the roots, heyday and impact of the Bakersfield Sound, the loud, stripped-down and radio-ready music most closely identified with the careers of Country Music Hall of Fame members Buck Owens and Merle Haggard." 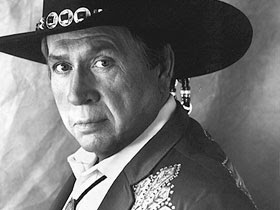 * ... WORST CITIES: In a reflection of just how bad the housing collapse hit California's Central Valley, a new list of the 10 worst cities for finding a job includes six from our valley. USNews compiled the list and noted that "the list of cities where housing prices remain depressed has striking similarities to a list of the cities with the worst employment problems." The top five were Merced, Fresno, Modesto, Stockton and Visalia-Porterville. Rounding out the list were Atlantic City, N.J., Bakersfield, Hickory-Lenoir, N.C., Riverside and Brownsville, Texas.
* ... TOO RISKY? Maybe it's just a sign of the economic times, but since when did U.S. Savings Bonds become "too risky" to cash? That's what an employee of the Bank of America told Anthony Finochhiaro the other day when he went to the Oswell branch by Country Club Liquors to cash six bonds. First he was told they would only cash 10 or fewer for non-account holders but later - even though he only had six - "the woman told me they were too risky and they wouldn't cash them. What is this, Greece?"

* ... CONVENANT: Covenant Community Services, the group that does so much to help put foster youth back on their feet, needs just $33,000 more to complete the remodel of its new headquarters and coffee bar at 1700 North Chester Avenue. The non-profit has managed to raise $50,000 so far, transforming the former bank building into an impressive center to help foster youth. Drop by sometime to buy some of Covenant's outstanding coffee and support this worthwhile project.

* ... OBESITY: Obesity and the factors that lead to it - poor diets, lack of exercise etc - are some of the biggest challenges we face not only here in Bakersfield but also in the country as well. So I suppose it's good news that the latest research shows obesity rates have stalled, but they remain extremely high. Overall, almost 36 percent of the adult population and 17 percent of children are obese. In Kern County, the rates are much higher, with as many as half of all adults overweight. With statistics like this, it's little wonder the number of people coming down with diabetes remains stubbornly high.
Posted by Richard Beene at 2:26 PM