Bakersfield rolls out the red carpet for the Amgen Tour of California and remembering Suzanne Rivera, local cyclist who died on Mother's Day

* ... AMGEN: Get ready for a day to remember Thursday when the Amgen Tour of California cycling race comes to town. Organizers are expecting as many as 30,000 people to view the race, which features some of the top pro cyclists in the world. The 18-mile time trial course starts on the bluffs across from Bakersfield College, follows Alfred Harrell Highway out to Hart Park and returns up the steep grade back to Panorama. It promises to be a spectacular event and if you have never witnessed a pro bike race, this is your chance to see some of the world's finest athletes in action. It's absolutely free, it starts at 1 p.m. and should by over shortly after 4 p.m. And, let's not forget to thank our city for agreeing to put water in the Kern River for the day to help put our community in its best light. 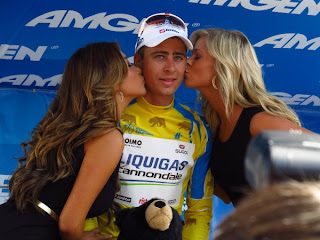 * ... RIP SUZANNE: Friends and family are mourning the death of Suzanne Rivera, the 47-year-old mother of two who died in a nasty crash during a women's road cycling race near Mariposa. Like any sport cycling has its share of inflated egos and posturing, but Suzanne always had a smile on her face and never had a bad word for anyone. She crashed into a support van on a steep descent on Mother's Day, but she died doing something she loved. (Californian photo of Suzanne with coach Danny Kaukola) 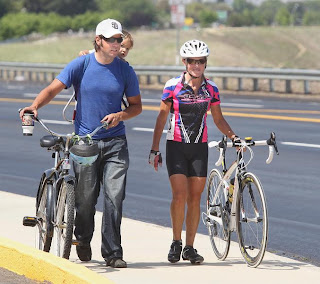 * ... HIGH ACHIEVER: Among the many notable kids graduating from high school is Cristobal Trujillo, a Ridgeview graduate who is headed to Yale on a full-ride scholarship. Michelle Beck, one of his former teachers, told me Cristobal came to this country speaking no English but eventually mastered the language and qualified for the GATE program. That's an accomplishment that should make us all proud.

* ... HOPPER: As if legacy media didn't have enough challenges, now comes the "Hopper" that threatens to to disrupt the television business model. The "Hopper" is a device offered by Dish Network that allows people to completely avoid commercials. Viewers can already fast forward through commercials, but the "Hopper" does it automatically and the viewer sees nothing but a momentary blank screen and no commercial. As the Wall Street Journal noted: "The notion that viewers won't see even a whirr of fast forwarded ads threatens billions of dollars in broadcast television advertising-and risks the ire of the networks."

* ... BAKERSFIELDISM: Donna Pacheco wonders if anyone else remembers Hart Park in the 1950s when it featured boat racing, the miniature train, a roller coaster and a merry-go-round. Donna worked at a food stand selling hot dogs and drinks.