Tour of California hits Bakersfield for a Stage 5 time trial, and Gov. Brown gets some advice on our ballooning state debt

* .... TOUR: The Tour of California cycling race rolled through town Thursday, exposing our community to a worldwide audience in the millions. I received a message from a friend who was viewing the Tour in a sports bar in Washington, D.C., and got another call from a friend who was viewing it in Pittsburgh. This is the second time the Tour has come through Bakersfield, and it is much more than a bike race. It has evolved into a social event, much like George Martin's Bakersfield Business Conferences in years past. And hats off to Sam Ames, the manager at Action Sports, who put on a spectacular hospitality tent featuring food, wine, beer and of course water for a hot day. Sam personally thanked volunteers Jim Cretoll and Keith Barnden for their help. 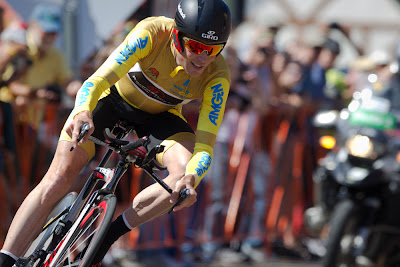 * ... PENSIONS: William J. Bennett, the former Education Secretary, has some advice for Gov. Jerry Brown on how to deal with the state's $16 billion deficit: watch how they did it in Wisconsin. "Wisconsin Gov. Scott Walker closed a large budget hole without raising taxes or cutting education but by going straight to one of the roots of the problem - public employee unions," Bennett wrote. "Until California addresses comprehensive pension reform, the state will continue to sink deeper into debt." Brown's answer? A ballot initiative to raise taxes while pension reform remains off the table.

* ... OVERHEARD: A middled aged woman who lives near Panorama Drive talking to a friend: "I wish this (Tour of California) bike race came to town every year. The city always does such a nice job sprucing up the area!"


* ... WORLD VIEW: Here are some news items from across the world recently: an Iranian rapper fears for his life after two clerics issue a fatwah  justifying his murder; Lady Gaga may be forced to cancel a concert in Jakarta because of complaints from Islamic groups; and a former Colombian justice minister narrowly escapes death in a car bombing in Bogota. Makes one feel good about being an American, doesn't it?

* ... HIGH ACHIEVER: Hats off to David Partida, a graduate of Bakersfield Christian High School and then Notre Dame, who will receive his law degree from Columbia Law School this month. His father, Armando, works for American National Insurance Company here in Bakersfield.

* ... PEPPERDINE BOUND: Another remarkable local student is Demitria Doubenmier, a Bakersfield High School graduate who has worked for Sequoia Sandwich Co. for the past three years. She graduated from Bakersfield College this spring with a 4.0 GPA and is headed to Pepperdine University on a full ride scholarship in the fall. Sequoia manager Valerie Damron told me she was raised by an amazing grandmother "and is such a testimony of hard work and resilience paying off. She has worked for me for three years and has never missed a day of work or been late once while taking a full load at Bakersfield College."

Posted by Richard Beene at 4:44 PM

Pension reform isn't "off the table." Brown has proposed an intelligent solution fair to both taxpayers and employees. The Democrats have bottled it up.

World view? More a case of pot and kettle ...

Governor in Wisconsin rescinds decades of struggle for worker's rights.

In November 2008 voters in California become the first electorate in US history to take away civil rights of their fellow citizens.

Just to name a few ... let's not throw stones, please.