* ... 24th STREET: There is a small but growing movement to oppose the widening of 24th Street downtown. A flyer being distributed to Westchester residents opposes the widening, saying it will destroy historic property and lead to a 40 percent decline in property values. The group is urging people to attend the upcoming hearings on the Thomas Roads Improvement Program (TRIP) project. Expect to hear more from these citizens. The plan is to widen 24th Street to six lanes, three in each direction, while cutting off some access to the south side of downtown by closing off some of the streets.

* ... GEESE: Darlyn Baker was heading west on Truxtun last week when traffic ground to a halt near Empire Drive. "Lo and behold, heading north across Truxtun was this family of geese.  It looked like the parents and six little ones. They made it safely across at their own pace... How refreshing to see the power of nature... to bring Truxtun traffic to a halt!" (photo by Darlyn Baker) 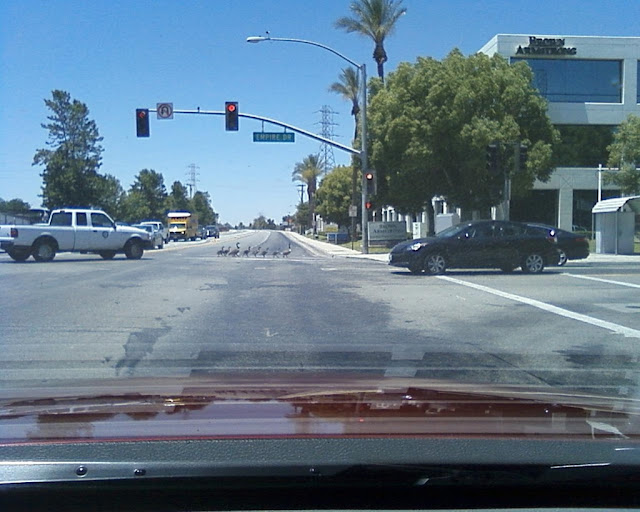 * ... GUN CLUB: The Kern County Gun Club will hold its annual dinner and auction this Friday at 6:30 p.m. at the Bakersfield Elks Club. This is always an interesting and well attended event featuring both live and silent auctions and drawings. Tickets are $100 each. For more information call Ken Ferra at (661) 332-4680. And speaking of the shooting sports, I ran into Mark and Betsy Ramsey at Trader Joe's the other day and they told me son Miles has taken up skeet shooting at the Kern County Gun Club. Miles is being tutored by Clifford Bolt, an ace skeet shooter and a terrific coach. Miles is thinking of entering the Junior World tournament later this summer. (file photo of skeet shooter) 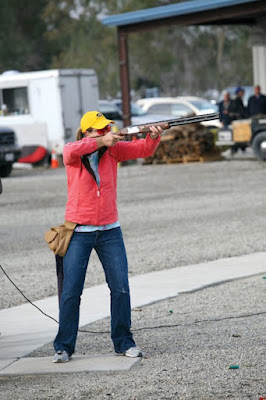 * ... SPOTTED: Driving south on Highway 99 in a pickup truck, the driver is reading the Camera Ads auto trader publication while his passenger is engrossed in texting on his cell phone.

* ... SENIOR PRANK: A group of seniors over at Garces Memorial High School posted flyers photoshopping the faces of Monsignor Michael Braun and other school administrators on a historic picture of Adolf Hitler and some of his henchmen. They also apparently glued some of the classroom doors shut to delay the final exams for underclassmen. All this was done after they had graduated but underclassmen still had a few days of classes left. This little prank was clearly in bad taste as well as being destructive, but as one parent said: "Boys will be boys. Monsignor Braun should just budget for year-end pranks like this."

* ... SWAP MEET: Reader Joe Michael was at the swap meet on Union Avenue one recent morning when he noticed a young woman wearing a matching smock and pants like a health care worker with a stethoscope in her front pocket. Michael wondered how smart it was to carry a stethoscope in such a dusty and dirty environment. "A good friend of mine living in another city had surgery ... and contracted a staph infection, which entered his blood stream, went to his heart and lungs and he died the next day..... I thought of approaching her and asking where she worked and if she planned to sterilize the stethoscope before using it, but decided against it," he said.

* ... PREFIXES: More feedback on those old telephone prefixes, this one from reader Don Edwards: "My folks bought a house in the early 1950s out by the airport. I well remember the party line and prefix days. However the EX prefix wasn't Exchange. It was Export. Just a very trivial correction."

The parents reaction of "boys will be boys" to the Garces prank disgusted me. Being a grad of GHS in the 80s shows me it's not my old Garces. I can see this especially at the football games. I like seeing the families and familiar faces ive seen from going to St Francis school and Garces. I'm very sure it wasn't one of these parents from those days. The pranksters parents should foot the bill for the damages. Thank you

Does reader Joe Michael really think that all those stethoscopes toted around hospitals and doctors offices are actually sterilized between patients? Half of patients diagnosed with staph infections in the hospital arrived at the hospital WITH the infections. Staph is commonly found on our skin and in our noses -- and enters the bloodstream through cuts (like surgerical incisions) and sores. But go ahead, blame an unknown person who appears to have a stethoscope in her pocket at a swap meet for killing patients. Makes PERFECT sense. What a bunch of know-it-all Nancys and scolds inhabit this column.

"Boys will be boys" ??? Is there some evidence / indication that the pranksters were male? Seems a little prejudiced to immediately assume boys did this.