* ... RETIREMENT: Forbes is out with its annual list of the best places to retire, and it should come as no surprise that California didn't make the cut. Forbes said that "high cost, high tax states like New York, New Jersey and California" were omitted in its list of the 25 top cities for retiring. Among those that were recommended were Albuquerque, N.M., Ashville, N.C., Austin, Tex., Bloomington, Ind., Boise, Idaho, Cape Coral, Fla., Fargo, N.D., Lynchburg, Va., Phoenix and Tulsa, Okla.

* ... GARCES: A reader who asked to remain unnamed dropped me a note about the senior prank at Garces Memorial High in which some doors were glued shut and the faces of school administrators were photoshopped on a picture of Adolf Hitler and his inner circle of Nazis. "Gluing doors at Garces?  Are you kidding me? That's not a prank, that's vandalism. 'Boys will be boys'....oh please.  Mighty poor excuse for the incredibly bad behavior by whoever thought up and carried out the disrespectful photo idea and the door-gluing vandalism.  I say let the students remove the glue and pay for any repairs necessary as a result of their actions. Perhaps take a course in history to find out about Hitler's evils.   Good thing those students have already graduated.  They wouldn't be returning to Garces the next year if I were in charge.

* ... STING: Hats off to the folks over at The Guitar Center and the Bakersfield police for setting up a sting operation that led to the recovery of an expensive stolen guitar. It all started when a 1989 black Fender Stratocaster owned by musician Robert Flores was stolen. He went to the Guitar Center to alert them to the theft, and sure enough two men came in trying to sell it. The police were tipped, the police set up a sting, two men were arrested and the guitar was recovered. (file photo of a Fender Stratocaster) 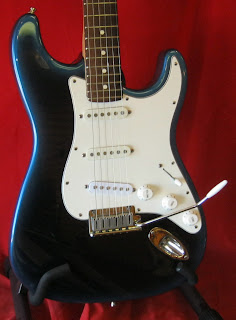 * ... LEADERSHIP: The Greater Bakersfield Chamber of Commerce is planning a reunion of all the classes of its Leadership Bakersfield program. The 25th class of the program is about to graduate, and the reunion is planned for Thursday, October 4, at Stockdale County Club. There are some 750 local people who have been through the program, and the Chamber is trying to local everyone to tell then of the event.

* ... PHONE PREFIXES: More folks are weighing in on the old telephone prefixes and party lines. From Sarah Heinrichs: "Yes the prefix for the Oildale area was EXport 9-xxxx hence the 399-xxxx when numbers replaced the words. The area around East Bakersfield High School and College Heights had the prefix TRinity 1-xxxx  not TRiangle and became 871-xxxx when numbers replaced the words. When my family first got a phone we lived in the EMpire 6-xxxx area, were on a 10 party (rural) line but only heard the rings of four of the party lines.  Being able to make or receive a phone call at times was a nightmare.  We later moved to Oildale with an EXport 9 number but had several friends who lived in the TRinity 1 area of town.

* ... MORE PREFIXES: This tidbit comes from Kala (Loewen) Stuebbe: "My father, Kenny Loewen, wanted me to pass on a telephone memory before even the prefixes. He remembers when his father, Pete Loewen, was a barber at the then new Padre Hotel Barber Shop in 1934 and their phone number was 164.  To contact them you would pick up the phone and a pleasant voice would say, 'Number please' and then connect you. Talk about 'hands free' (well almost). My grandfather later bought the barber shop and owned it from 1940 to 1976.  My dad loves to go to the 'New Padre,' by the way.  Lots of memories.

I graduated from Garces well over 10 years ago and have been away from Bako and in the world since that time and I think the gluing part was hilarious. Can't say the same about the Nazi photos, though--a lot of the more cowboyish kids when I was at Garces used to joke about being Nazis and almost idolized them; it was part of a general mentality of those who stuck around that led many of the more academic minds in my class to leave town for college and never return. I guess things don't change at Garces.