* ... FRAZE: Former city fire chief Ron Fraze has pulled out of the race to succeed Sue Benham in the Ward 2 City Council race. Fraze was one of the first to express interest in running for Council but sent an email Friday telling friends he had reconsidered. "We appreciate your friendship and your support, however, we believe God is leading us in a different direction. We intend to return all monies that were contributed to my campaign," he wrote. Others running for the seat in the November election include Elliot Kirschenmann, a member of the Bakersfield Planning Commission, and Terry Maxwell , a local restaurant owner. 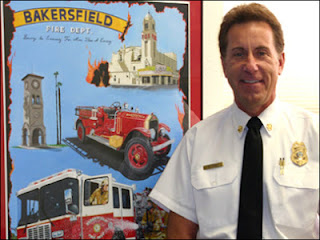 * ... POLITICS: And speaking of politics, are you ready to vote in Tuesday's primary election? Are you familiar with the issues on the ballot? We will be previewing Tuesday's election on Californian Radio KERN 1180 beginning at 9 a.m. We will also talk to Dr. Raj Patel of Preferred Family Care Physicians about the epidemic of diabetes in our community.


* ... BAD SERVICE: Is there any worse customer service on the planet than ATT? I was forced to convert to ATT for internet service when I ordered DirecTV, and friends had warmed me about the company's reputation for poor service. But even I was dumbfounded after I spent more than two hours - yes that is correct - being shuffled around to different numbers and customer service reps just to locate a lost order.

* ... PHONE PREFIXES: Craig Holland remembers the old telephone prefixes back in the day. From Craig: "The central part of Bakersfield had the FAirview exchange, while the east side had EMpire, Oildale had EXport and south side of town had TEmple... I can still remember the first phone number my mom had me memorize: FA3-5146."

* ... LITERACY: The Kern Adult Literacy Council has found a new executive director to replace Donna Hylton, who resigned recently.  Ida Tagliente will fill the role on an interim basis and her position will be reevaluated in six to nine months. Board president Clayton Mongtomery said, "Ida’s past experience on the executive board and at Bright House Networks makes her a great fit for our team, and I have every confidence that she will guide us through this transition and into a stronger position."

* ... BAD GRADE: And speaking of literacy did you know that Bakersfield is considered the "least educated" city in America? According to The New York Times, only 15 percent of the adults in Bakersfield hold a college degree, compared to a national average of 32 percent. Lost Angeles weighed in at 21 percent, Las Vegas at 21.6 percent, Boston at 43 percent and Dallas at 31 percent.

* ... BAKERSFIELDISM: Local physical therapist Kyle Lacy says you have been around Bakersfield a while if you remember Fred Clad motors that featured imported auto brands like Jaguar, Porsche and others.
Posted by Richard Beene at 10:51 AM