A reader recalls a chance encounter with the late Julia Child, who revealed her family's Bakersfield roots

* ... JULIA CHILD: Did you know that the late Julia Child (she would have been 100 years old this Wednesday) had Bakersfield roots? That's according to Susan Peninger, who shared a story about running in to the famous author and cook at LAX years ago. Child was alone and Peninger engaged her in conversation. "She asked my favorites (recipes) of hers and when I told her a gateaux and her roast chicken, she repeated the words I can still hear in my head when I think of her. Then, suddenly, the tables turn (no pun intended) and she was the one asking questions. She wanted to know all about me and where I was from, and so forth. When I said Bakersfield, she told me that her father had owned land in Bakersfield and that the family was here often during that time. In my research later, I discovered her father, John McWilliams Jr., was a California land developer who did own Kern County land and as I recall it was in the 1920s-1930s, and perhaps beyond.  It was Julia herself who told me the family lived here briefly." 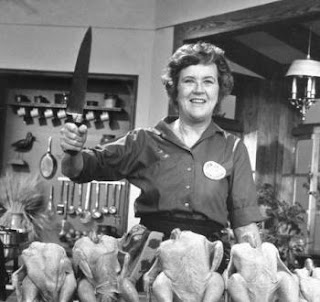 * ... OUR WORLD: Claudia Casagrande wrote to share an experience in the Kern Medical Center waiting room. "I spent 5 1/2 hrs in the orthopedic waiting room at KMC with a relative who has a broken leg.  The waiting room was hot and crowded.  Crowded with people with broken limbs as well as able bodied friends and family. A young woman with a newly casted leg hobbled in on crutches to wait for her pain prescription. She was in obvious pain and looked around for a place to sit. She asked one middle aged woman if she could sit in the only vacant chair. The woman replied that she was saving it.  No one offered their seat, so I, probably the oldest female in the room, offered mine, after which a young man with an injured arm, insisted that I take his seat. The scenario played out several more times that afternoon and a few more men and woman offered their seats to others.  But many able bodied men and women did not. The woman who was saving the chair saved it for a half hour or so, before her son came and sat. "

* ... CAL RADIO: Prices are going up in the local real estate market and the inventory of homes for sale is at or near an all-time low. On Monday at 9 a.m., join me on Californian Radio (KERN 1180) when I will be chatting with Scott Tobias, head of the Bakersfield Association of Realtors, when we will be talking about the state of the local market.


* ... THE MARK: The staff of the new downtown restaurant called "The Mark" is a collection of young people picked up from other eateries across town, and two of them are local products from rival high schools. Chef Ro Fernandez is a Shafter General, and bar manager Tony Partida (formerly of Cafe Med) hails from cross county rival Wasco. "It's like old home week here," Partida told me. The Mark is beautiful addition to downtown and is located on 19th Street in the building that once housed Goose Loonies.


* ... INTERNS: Assemblywoman Shannon Grove has a new group of interns for her Bakersfield and Sacramento offices, all of them high achieving youngsters. They include Kirsten Albers, a sophomore in the Walsh School of Foreign Service at Georgetown University; Leah Avila, a junior at Cal State Bakersfield; Mackenzie Carter, a sophomore at Cal Poly, San Luis Obispo; Jasmin Howells, a junior at Patrick Henry College in Virginia; Michelle Huete, a sophomore at UCLA;  and Andrew Worthing, a senior at Northwestern College in Saint Paul, Minnesota.


* ... MOVIES: Here's something I bet most people have experienced. From reader Beth Espinoza: "The new trend in Bakersfield is to take your baby, toddler, adolescent, etc. to movies with R ratings. I sat next to families at Ted and Savages most recently. Now I know I shouldn’t be judging the parenting skills of others but, really, people? If you can’t afford a baby sitter then go see a movie made for families!"