Bako Bits: speculating about the old Padre Hotel and $160,000 raised for the children's wing at Bakersfield Memorial Hospital

* ... SMALL WORLD: Mary Vanfleet and her husband, owners of Purifying Systems, were on a 12-day trip to China recently when they were reminded just how small the world is. "While cruising down the Yangtze River on a ship that holds only 200 passengers, my husband Rodger and I ran into our old neighbors from Bakersfield, Ed and Chris Biebrich! They moved about 15 years ago and now live in North Carolina. We haven't seen each other since. Ed Biebrich was with American Bank and then with Citizen's Bank and is now retired. So after all these years,  there they were and there we were in a far away land. It was like running into an old friend at Cafe Med!"

* ... HAUNTED PADRE? Who would have guessed the the old Padre Hotel would turn up in a new cable television show featuring an alleged psychic from Long Island? Will Winn said it happened as he was watching a promotion for a new episode of "Long Island Medium." The episode features an email the psychic received from a lady who claimed to have been visited by a child who died in a hotel.  "The picture of the hotel is shown and it is the Padre!" Winn wrote. "Wonder which room she was in?" 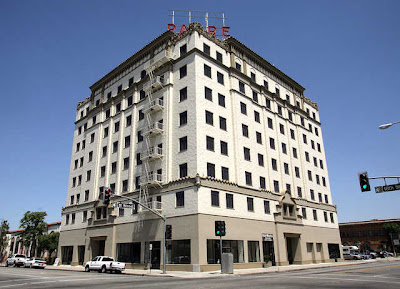 * ... MEMORIAL: Good news from the 10th Annual Larry Carr Memorial Golf Tournament last week: it raised more than $160,000 to go towards the construction of a children's pavilion for emergency care. The event was held at Bakersfield Country Club and was co-chaired by Steve Loyd and Jenny Waguespack.

* ... COLLEGE BOUND: Julie Gibson wrote to say that her son, Timothy, is now attending the University of California Irvine and while dropping him off at school, she learned he was in good company.  "Five of his classmates from Golden Valley High School who were also on the 'We the People Constitution' team are also entering freshmen at UCI. They include Arshdeep Gill, Rocio Martinez, Karen Cervantez, Juan Castaneda and Stephanie Padilla.  I attribute that to the influence of their coach, John Hansen." Mike Gibson, Timothy's father, was his son's football and baseball coach at Golden Valley.

* ... BLESSING: One of my favorite events will be held this Friday at the St. Francis Parish School when it will hold its annual 'Blessing of the Animals.' It will start at 2:30 p.m. at the Palm Street school. The community is invited to bring pets for a blessing, in honor of the feast of Saint Francis of Assisi, patron saint of animals, along with their spare change.  It is always a fun event, with critters large and small, manageable and hard-to-handle.  The school will also finish its annual  Coins for Canines drive to raise money for needy pets and will donate the money raised, in addition to blankets and pet food, to a local animal charity.

Posted by Richard Beene at 2:10 PM