Bako Bits: time for another First Friday in the downtown arts district, Bernie Herman leaving the museum and remembering the old Homemaker Park

* ... ICE HOUSE: The Sizzler restaurant at the iconic Ice House has closed, leaving the community with just two Sizzlers, one on Mount Vernon and the other on Real Road. Lynne Woodward of Taft was told by the manager that the Mt. Vernon location is now part of a "new generation" of Sizzlers. But the move leaves the red bricked Ice House with a big vacancy. "What a shame for a true historic Bakersfield building (not to mention the jobs probably lost)," Lynne said. "Let's hope a wonderful new restaurant will jump at the chance to open in the picturesque location!"

* ... OVERHEARD: A middle aged man is lamenting to a friend about the number of people locally who run red lights. "It seems I see it every day around here, it's dangerous and someone is going to get killed. If I had a death ray, I'd use it on these people blowing through lights."

* ... OLD BAKERSFIELD: Donald Kurtz grew up on the east side of our town and remembers when the area around 30th and Q streets was called Homemaker Park. "How did the city allow this area to become a drug infested domain for gangs and looks like it has been razed or bombed out? It was built during World War II and was populated by a very strong work ethic middle class families. As a matter of fact after my spouse and I married in 1965 we rented in the area for a few years. Surrounding the area were many business, both commercial and industrial. Today most are gone. Go down 34th Street and it looks like total urban decay. Someone at City Hall really needs to wake up and smell the coffee before it is too late. All American City... I think not!"

* ... FIRST FRIDAY: If you are out and about Friday night, make sure you head downtown and take in the arts district during October's First Friday celebrations. One show not to miss: the Metro Galleries on 19th Street is featuring the art of former CBS newsman Bill Lagatutta, an impressive and interesting show featuring some unique art.

* ... MUSEUM: And speaking of the arts, best luck to Bernie Herman who is stepping down as executive director of the Bakersfield Museum of Art after eight years. During his tenure the museum paid off its debt, greatly expanded its education programs and consistently produced high quality shows. Bernie will be retiring after the first of the year, giving the museum Board of Trustees time to find a successor. 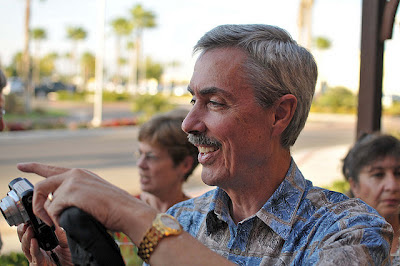 * ... STREET SWEEPERS: There may be bigger things to worry about, but sometimes it's the little stuff that drives you crazy. For Jim VanderZwan, it is the city street sweepers. "Why is it that when street sweepers come around, they almost always leave the condition of the gutters worse than before they came through with their big bristles full of mud water?  Do they fill up at Buena Vista lake before painting the edges of the street with giant streaks of mud? This past week I came home from work to find that the sweeper had been through the neighborhood. How did I know? The neighborhood kids were riding in the sweeper's path like it was a BMX track. This kind of thing doesn't really bother me, except that my tax dollars pay for someone to drive through once a month and leave a trail of mud that fades only in time for the next round of 'cleaning.'"

* ... LAWYER: Hats off to local lawyer Therese Foley was was recently presented with the Sharon Wallis Mettler award by the Kern County Women's Lawyer Association. The award recognizes local lawyers who have "demonstrated a genuine concern for issues relating particularly to women and a willingness to advance, protect, and pursue those concerns, however difficult, time-consuming, or long-range they may be."

Posted by Richard Beene at 4:01 PM