* ... BASEBALL: I got a sneak peek at the early plans for the new minor league baseball stadium being planned for the corner of Brimhall and Coffee roads. The principals of the Kansas City architectural design firm (Pendulum Studio) unveiled the plans before a small group of business people at the downtown, Neutra-designed home of David Coffey Wednesday evening. The first draft shows a beautiful, compact stadium built on seven acres with the ball field dug several feet below the surface, offering spectacular views from virtually anywhere around the perimeter. There is family-style seating, a mounted grass berm play area behind the outfield and a multi-purpose room that can be used for special events. The main investors, oilmen Gene Voiland and Chad Hathaway, envision a multi-purpose venue that can be used for anything from concerts to conferences to rodeos. 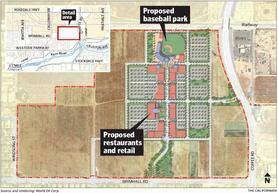 * ... RESTAURANT: Bakersfield is getting a promising new restaurant next Friday. The owners of Sushi Moon say they will open February 1 in the old Hourglass Building at the corner of Brimhall and Calloway Drive. Sushi Moon will feature fusion sushi and Korean barbecue, and I am told they also will carry a nice selection of Japanese and Korean wines.

* ... PRAYER BREAKFAST: There was a lot of response on my earlier post about the upcoming Bakersfield Prayer Breakfast and its emphasis on the Christian view of Jesus. One reader, who is Jewish, said it appeared to exclude those of other faiths, including our sizable Sikh population. And then there was this tart response from another reader: "Tell your friend, who happens to be Jewish, if he is so butt-hurt, he should start his own 'prayer breakfast.  Your newspaper is pathetic."

* ... BANDUCCI'S: Retired oilman Lynn Blystone is one of those who remembers Banducci's Corner, and he even recalls the help there. "Our favorite waitress at the Double Tree, Inez Coronado. was a waitress at Banducci's Corner for 22 years and could tell you some stories."

* ... MORE BANDUCCI'S: Barbara Story wrote that Julia Banducci was her grandmother, and as a child she would help in the grocery store every Saturday. "At that time the restaurant only had the counter, no dining room.  It was so busy that a dining room was added some time after the war. Dick Porter was right about all the business done during potato and grape seasons. The customers all had their special place to sit and their special lunch order.  In high school and college I worked on weekends and summers as a waitress. We knew almost everyone that came in by name.  My sister Judy and my daughter Melinda preferred to work in the kitchen.  Our children Chuck, Patrick and Michael all had their first job at Banducci’s doing dishes, and as Chuck remembers pealing lots garlic.  In that small kitchen my grandmother supervised the making of the raviolis as well as everything else.  Melinda still makes raviolis and pickle tongue for gifts for the family at Christmas.  Many, many pleasant memories like the fried chicken cooked to order with spaghetti, minestrone soup, home made pies, pickled tongue,  pickled white beans, garlic beef dips to name just a few of my favorites. One could write a soap opera about all the happening that went on at Banducci’s Corner."

* .... OLD BAKO: Joaquin Resendez wonders if anyone remembers a restaurant called Spanish Kitchen that was located next door when Sinaloa was located in the Wool Grower's building. "They also served pyrenees bread with their salsa. I believe Wool Growers was located on 21st Street at that time."

That tart reader response pretty much symbolizes why so many of Bakersfield's brightest sons and daughters leave for college and never return (as evidenced by the city's bottom rank in % of citizens holding a college degree).

It's exciting to see the plans for the stadium. The other commenter mentioned a good point, but the brain drain happens to a lot of smaller cities. Fresno has almost as bad.