Rep. Kevin McCarthy, House Majority Whip and a Republican from Bakersfield, gives us his weekly roundup from Capitol Hill. In his own words:

"Every summer we see gas prices rise as summer-blend fuel replaces winter-blend at the pump. But recently, Californians haven’t needed Memorial Day fuel spikes to remind us of fluctuating fuel costs. In fact, gas prices haven’t been stable for years – resulting in pain at the pump that hurts local families and small business owners. But there is a way to help stabilize fuel costs, and it starts 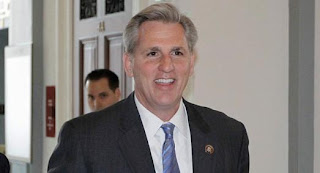 right here in Kern County. Kern leads California in oil and gas production, producing roughly 70% of California’s domestic oil and 58% of its natural gas.  In fact, we are one of the top petroleum-producing counties in the nation.

"Unfortunately, burdensome red tape from Washington and Sacramento are stifling local potential for more American energy development and production. Instead of encouraging growth in the energy sector, this Administration continues burdening energy producers with overregulation, overtaxation, and overlitigation. Kern County Planning Department officials put it best, saying energy development in California is “subject to a complicated multi-level system of governmental regulations and programs” that are “costly and confusing for industry to comply with.”

"The President’s anti-energy regulatory policies have suppressed domestic energy development on federal lands holding vast untapped oil and natural gas resources – a missed opportunity that hits the pockets of hardworking American families and small businesses instead of creating jobs and powering our local and national economy.

"This energy agenda is flawed.

"California – and particularly our region – has potential energy resources that position us to lead the way in oil, natural gas, renewables and electricity.  In fact, a recent study revealed an estimated 15.4 billion barrels of shale oil could be recoverable from the Monterey Shale right here in our backyard.  We have the resources; now we need the policy.  Look at North Dakota - their 3 percent unemployment rate can be directly attributed to their growing energy sector. California has even greater energy potential, yet statewide unemployment continues at almost 10 percent and over 14 percent locally. These are some of the reasons I joined Budget Committee Chairman Paul Ryan in support of the new House Republican budget, which passed the House last week. It puts our nation on a smart path to energy independence by taking advantage of our resources here at home through an all-of-the-above energy plan, including:

1.      Expanding production of oil shale, one of our most viable new energy sources;

4.      With new technology, allowing the construction of clean coal, nuclear and biofuel plants.

"Kern has been a leader in energy production since the mid-1800s when “black gold” was first discovered.  It’s part of our history; a critical component of our local economy and a continued compass to our future growth. That is why I believe in promoting pro-growth policies that will help jumpstart American energy exploration - and provide Californians and all Americans affordable and reliable energy, made in America, by Americans, for Americans.
Posted by Richard Beene at 3:02 PM

I gather he is in favor of the coal plant proposed for Kern County. The county with the filthiest air in the nation. When is enough enough?

Apparently, you have not done research on coal lately.