In what can only be described as one of the oddest stories of the day, the husband of 5th District Kern County Supervisor Leticia Perez is revealed to have converted to Islam and to have worked with the CIA in Yemen and other countries after the September 11 attacks.
His name is Fernando Jara, and according to a front page story in the Los Angeles Times, he is a former gang banger who - in search of himself - converted is Islam. After the September 11 attacks, he claims he offered up his services to the CIA and was sent overseas. He apparently speaks fluent Arabic and now runs a recovery center for addicts.
The story paints the picture of a rocky marriage and emotional trauma suffered by Jara after his service. The Times claims to have verified most of his claims of service. Perez is now thinking of running for the open 16th state Senate seat.  (file photo of Perez and husband Fernando Jara) 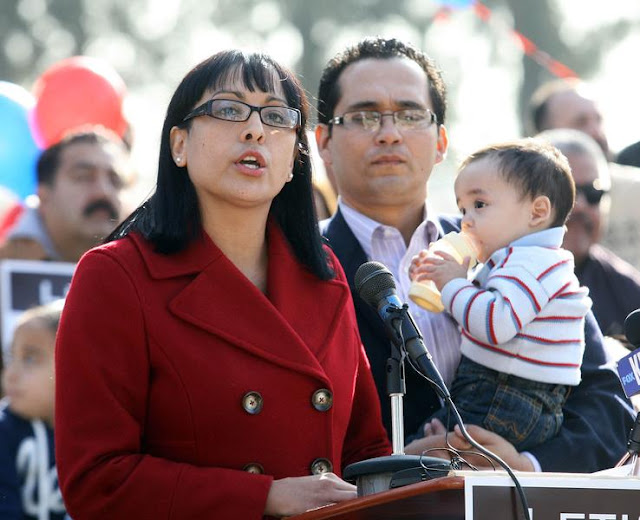 Sorry this reporter makes him out to be a bit of a nutjob...he really is an amazing man and perhaps incredibly honest about his emotions to a fault. that makes him soulful. together they are are one of my favorite couples with much to admire in all their efforts, with each other and this community.

Don't know much about either, but I wish someone would shut the revolving door of politics. Why can't someone just finish a term. Besides Dont supervisors make more than Senators?

This is smart and smooth for Leticia those who know them knew that he was a Muslim at one time this explains it away. This is "wag the tail" move for her to run for the state seat that's all. How come this came out the same day she announced that she was running for that state seat. There is a alot of stuff to this story if somebody would just dig deep.

maybe he's tired of standing in the background holding the baby....

This reminds me of something.

It's sad that the revolving door put someone else out of a job... that probably wanted it. This strategy of "winning" at all cost is something to behold indeed.

Leticia Perez is a terrorist loving illegal alien supporting turd and it goes without saying that so is her husband.