The never-ending cycle of criminals being dumped on the streets only to commit more crime sparks a backlash, and eat more fish if you want to avoid heart disease

* ... CRIME: There is a growing backlash against prison realignment and the way so many career criminals are dumped back onto the streets, often after serving only a fraction of their sentences. One reader, Margaret Roux, noted that an 18-year-old man was arresting for burglarizing a nearby home, all the while wearing his parolee tracking ankle bracelet. He was arrested and the homeowner was able to recover most of the stolen items at a pawn shop. As it turns out, the same teenager was arrested in
December for possession of a stolen vehicle, receiving stolen property and possession of a controlled substance, but served just 49 days before being released to hit the streets to burglarize again. And so it goes.

* ... FISH OIL: If your mother told you to include more fish in your diet, it turns out she was right. A new comprehensive study in the Annals of Internal Medicine confirms what we all have suspected: that people with "high omega-3 blood levels outlive those with the lowest levels." As reported in The New York Times, researchers said there was a direct correlation between the intake of fish and lower risk of heart disease. The conclusion? If you don't eat enough fish, take omega-3 supplements. If you are on a heavy fish diet, supplements would certainly not hurt you. (photo courtesy of The New York Times) 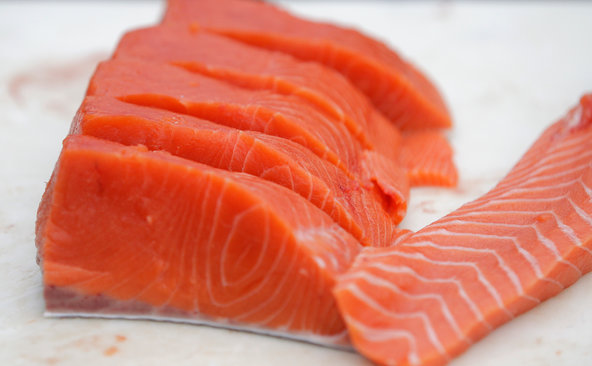 * ... CIOPPINO: One of the hottest tickets in town is for the annual Cioppino Feed, the annual West Rotary fund raiser that features some of the best clams and cioppino you will ever eat. Word is there are some tickets left for the Saturday evening feed at Garces Memorial High School. Call Howdy Miller if you interested at (661) 747-5380.


* ... FIRST FRIDAY: Should be a great Spring night for this month's First Friday downtown. Metro Galleries, one of the anchors of this popular monthly event, is featuring a unique exhibit by Southern California artist Karine Swenson. The show is entitled  'Real and Imagined: A Collection of Mostly Animal Paintings.' Next to Metro at the Foundry, a photography exhibit, "Superimposed" will feature work by Jennifer Williams and Tim Chong. As always on a First Friday it's fun to check out all the galleries, shops, restaurants and boutiques in the arts district.

* ... LITTER: It's our collective shame that after every holiday, like Easter, our parks are awash with litter. Deanna Haulman had this suggestion: "My husband and I walk at Hart Park. We notice that after the weekend the litter is awful, even dropped next to the large garbage cans throughout the park, apparently the litters are too lazy to even place the litter in the can.  We pick up during our walks but have come to the conclusion these folks assume someone else is responsible for picking up their garbage.  I would like to see the park rangers start to give tickets for littering maybe that would help obviously our efforts and the efforts of others doesn't help."

* ... ADS MARKET: Some more memories of old Bakersfield, these compliments of Terrie Stoller. "My parents; Jack and Lyle Parlier, taught at Washington Jr. High School in the late 1930s and through the 1940s. It is now a district office. Admiral Dewey Sprayberry and his wife Velma became their very first friends in Bakersfield after their Fresno State College graduations and very first teaching jobs in Bakersfield. I got the feeling that Dewey and Velma were like surrogate parents of a young couple just starting out. ... I remember the Sprayberrys, their little ADS grocery store and apartment next to it very well.  My mother remained a faithful visitor to Velma until her last days."