* … PURSUIT: Curt Kunzman runs a high end custom cabinet business called Best Cabinets and lives a quiet life downtown. His home was burglarized last week, and while I wouldn't recommend reacting as he did, you have to admire his chutzpah. It was around midnight when his wife was

awakened by noises outside, and when Kunzman investigated, he found a hooded intruder in his back yard going through his tool shed, carefully piling up items to steal. Kunzman pursued the man, grabbing on his legs as the intruder hopped over a concrete wall separating the Kunzman property from the home next door. In hot pursuit, Kunzman hopped in his white Ford pickup and drove the alleys downtown looking for the suspect, eventually finding him on a bicycle riding down 21st Street with two cardboard boxes on his handlebars. "I drove up next to him, going slowly, rolled down my window and grabbed his jacket," Curt told me. "He told me the boxes contained bottles and cans so I told him to pull over and let me see what was inside." The suspect agreed, slowed down and then sped off. The chase continued and later the suspect crashed the bike and fled on foot. Kunzman stopped, threw the bike and the boxes in his truck and called police, who were there in minutes. Inside the boxes? Jewelry stolen from another house just a few blocks away. A suspect was later arrested and charged.

* … TRICE: I ran into former Assemblyman Trice Harvey at Luigi's last Saturday. Harvey was wearing a Fresno State letterman's jacket and quipped that normally, he roots for USC football but not when the Trojans face the Bulldogs in the Last Vegas Bowl game. "That's the only time I root against USC," he said. (Trice Harvey with a friend in a file photo) 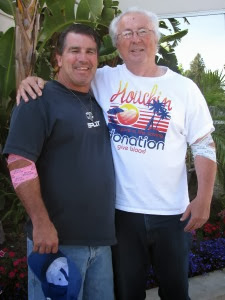 * … THEFT: My post about two purse snatchings at local Starbucks drew this response from reader Janice Witcher: "I was at the Starbucks by Target on Rosedale Highway, sitting outside reading a book with my phone on the table. All of a sudden a man grabbed my phone and ran off to a car parked in front of Rubios (conveniently parked backwards and jumped in the car and sped off). I ran after him but the El Camino he was in had no rear license plate. I was stunned to say the least. Just a word of advice from someone who learned the hard way, never put your phone or purse on the tables. It is sad to see how desperate people have gotten."

* … GOOD FORM: The author of this note wishes to remain anonymous, but it speaks for itself. "I work at the Bakersfield Adult School and wanted to share something about an extraordinary individual that I work with. A student came up to me the other morning and mentioned that he had overheard another student talking about how overjoyed he was that he was indeed going to be able to participate in our December 20 Commencement Ceremony. =Apparently he was not going to be able to accept his diploma due to not having the money to purchase his cap and gown. It is heartbreaking to see such strive and perseverance not be acknowledged because of a minimal monetary expense that for most of our students can be a huge dent in their pocket book, something that some of us may take for granted.   Well it turns out that our wonderful Principal Mr. Mark Wyatt heard of this and he himself took the student to purchase the cap and gown needed to walk and received that hard earned diploma. This is what the true meaning of Christmas is to me and how this school is filled with truly self-less staff members who care about our students."

* … MEMORIES: Erica Langstron wrote to remind me that the "little green store" near the airport is still operating and serving the community. "It is owned now by a wonderful family that has been a great boost to our Oildale community," she said. "We have known them since they were first here. We have watched our children grow up together, shared joys and sorrows. No, you no longer can see the terminal, but we all look up and see the beautiful cloud formations, sunsets and gifts all around us. The memories abide."

Posted by Richard Beene at 1:01 PM