Cal State kicks off its year-long tribute recognizing the publication of The Grapes of Wrath and the Dust Bowl and when will the Bakersfield bashing end?

* … HOME: Anyone who calls Bakersfield home has endured the insults of outsiders, who somehow believe it is open season to criticize this community. It's a curious obsession, started when Johnny

Carson used Bakersfield as the butt of his late night monologue, but it's based on the false assumption that happiness is determined by one's zip code. Does a deeply unhappy person here evolve into a beautiful swan once she moves to Santa Barbara? Or is happiness a personal choice no matter where you live? Wouldn't it be more productive to spend our time here embracing the good that lives in any community? I choose the latter, so take the following insults with a grain of salt.

* … INSULT: I spotted this insult to Bakersfield on a friend's Facebook wall: "While going through security at an airport in New Mexico, (the) TSA (agent) asked me if I knew why no one wants to live in Bakersfield. I said good, then don't move there. Then he said 'because it sinks like oil.' I said, 'that's the smell of money.' He said; yeah, 'dirty money.'"

* … AND ANOTHER: And the Bakersfield bashing doesn't stop there. My friend Don Clark told me he was listening to comedy radio when he heard comedian Ron White say this while performing in Texas:  "I was in Bakersfield, California, last night," he said, followed by the punch line, "And you think you're stupid!" Said Don: "All I can say is, let's never again be stupid enough to buy another  ticket to any of his shows."

* … BIRTHDAY: But enough of the insults and back to the real world. Here's an interesting note from reader Ann Dale: "Yesterday, January 14 was an amazing day for our family. Our grandson, Michael Pinheiro, was born at Mercy Southwest Hospital. The amazing thing is he was born on my mom's 89th birthday, my brother's 51st birthday, my nephew's 36th birthday. Now my mom has a son, grandson and great grandson all born on her birthday."

* … DUST BOWL: Dust Bowl fever is in the air these days. Cal State Bakersfield is kicking off its year-long nod to the 75th anniversary of the publication of the iconic book, the Grapes of Wrath. So too is the Bakersfield Museum of Art, beginning Thursday evening, January 23 at its winter exhibition opening reception. The crown jewel of the night will be striking photographs by Horace Bristol, The Dust Bowl Series.  Bristol,whose work appeared in LIFE, Fortune and Time Magazines, traveled with John Steinbeck, documenting life in the labor camps as Steinbeck researched material for his novel. Bristol's photos were said to have been used by the set designers of the film. Bristol's evocative images tug at the heartstrings of many Kern County families whose descendants traveled Route 66. Bristol's son, Henri, is scheduled to be on hand for the exhibition opening. Organizers hope community members with tales from the Dust Bowl are able to attend as well. 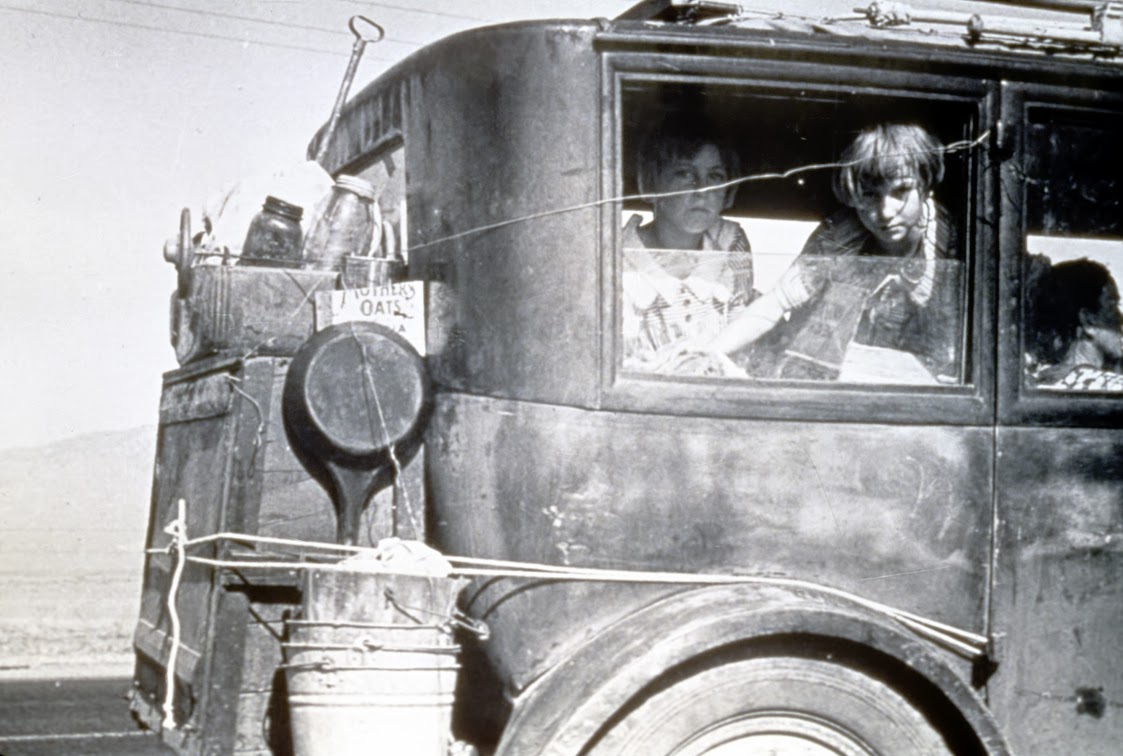 * … GOOD DEED: And hats off to the volunteers over at Covenant Community Services who collected and donated books to every student at North Beardsley Elementary School. Marilyn Dropper told me Standard School district will be the next beneficiary. New or gently used books can be dropped off at Covenant Coffee at 1700 North Chester. Donors will receive a free cup of coffee with the donation of two or more books.
Posted by Richard Beene at 11:56 AM