* … CATS AND DOGS: My two favorite stories of the weekend were all about cats and dogs. First, the organizers of the annual Bakersfield Christmas Parade scored the equivalent of a marketing grand slam by designating "Tara the hero cat" as its grand marshal. Tara, a former stray turned loyal

Tabby to the Triantafilo family, became a national sensation when a security camera caught her chasing off an angry dog that attacked 4-year-old Jeremy Triantafilo. On the canine side, it was good to see that Killer, a toy Pomeranian maltipoo mix, had been returned to its owners after a mixup at a local shelter. 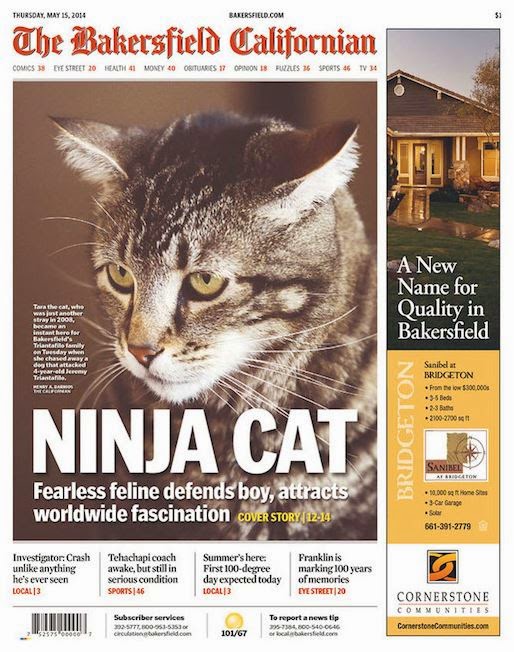 * … THANKSGIVING: It's difficult to remember a Thanksgiving with better weather than we had this weekend. As a friend put it: "It's my favorite holiday. It's not about gifts or excess. It's about family, friends and great food." And speaking of the Thanksgiving meal, did you know that 51 million turkeys were consumed this weekend, and the average family spent $302 on meals? As for myself, I hosted a long table of strays, including a good friend who brought three delicious pies from Window Sill Pie Co.  They sell their wares at the Haggin Oaks Farmer's Market or you can find them online to order. 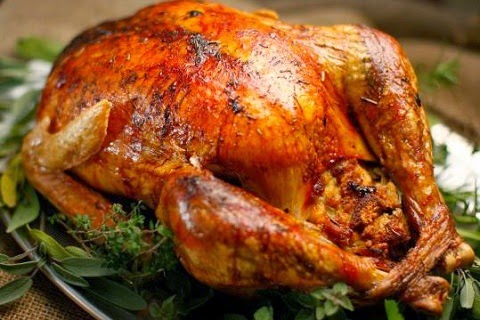 * … NO BURN DAYS: A friend of mine wrote with a concern that crossed my mind regarding the so-called "no burn" days enforced by the San Joaquin Valley Air Pollution Control District. He asked that I without his name because he feared retalitation from the "pollution police" at the valley pollution control district. He wrote: "I'm anonymously writing because of the No Burn Days. As a conscientious resident of Kern County, I/we want to do our part. We accept that we will only receive approximately 25 percent of burn days this year. What a dissapointment to go to the website and see that they couldn't have at least given us Thanksgiving as one of those days!" That may be asking a lot from the people who took on the popular Thanksgiving Day Pie Run a few years ago because they didn't approve of a small bonfire.

* … GOOD FORM: A little good news, and good form, is always welcome in a world that often seems chaotic and hopeless. Carole Daigle was shopping at the Rosedale Walmart on Friday morning a woman gave her and two other women an envelope. "I first thought it was an employee passing out coupons.   put the envelope in my pocket and went to scan the item that we were looking to purchase.  When I returned to the department with the item's price, the other ladies asked if I had opened my envelope.  In each of our envelopes was a twenty dollar bill. WOW, we sure did not expect that! The lady that was passing out the envelopes had given out lots of money to complete strangers.  (She gave out a whole handful throughout the store.) How awesome is that?  I want to thank her from the bottom of my heart as she has restored my faith in human kindness. This one woman has lit a candle of hope that will burn bright and outshine the negative acts that we have been hearing about lately.  She made the holiday season brighter for many people. With a heartfelt smile I will add to her gift and pay it forward."

* …NOISE: This from a resident of Trinity Estates in the Northwest: "We live in Trinity Estates and today, the Thanksgiving holiday, we are having to listen to a construction crew pouring concrete, compacting dirt, hammering and cutting stone beginning at 7 a.m. at the new home being built  on our street.  I don't blame the workers as I'm sure they can use the extra income. I do blame the builder for not showing more consideration for nearby neighbors and the family holiday."