House Majority Leader Rep. Kevin McCarthy: The presidency of Barak Obama is one based on the singular principle of overreach 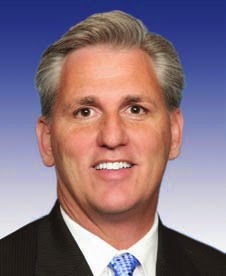 Obamacare. The case, King v. Burwell, is another challenge to the law that was forced through Congress by the Obama administration. Should the Court rule against the law, it is imperative that Republicans respond with a health care plan of our own that increases choice, lowers costs, and gets the government out from in between you and your doctor.

"Earlier this year I established a working group to develop an alternative to Obamacare should the Courts strike it down. A day before the Court heard the arguments this week, the Chairmen of three House committees released an editorial that outlines the House plan. When the Court issues its ruling, the House will be prepared to present a way forward to the American people.

"Just as was the case with Obamacare, the president has defined his presidency as one of overreach.

"Late last year, the President issued an executive action that rewarded illegal immigration. And just a few weeks ago a federal judge in Texas struck it down and placed an injunction on its implementation. As the judicial review is underway, I believe that the legal case against the president’s executive action is strong. Without any willing partners in the Senate in which we gave them over a month to craft an alternative to House passed legislation, and with arcane rules that allow Senators to hide behind a 60-vote threshold instead of working out differences in a conference committee, I would not play politics with our security when the Senate is unable to act.

"The Congress heard from Israel Prime Minister Benjamin Netanyahu on just how unsafe the world is.  The security of our nation is my greatest concern.  Threats from terrorist organizations such as ISIS must not and cannot go without a strong response and we must be vigilant.

"Prime Minister Benjamin Netanyahu’s address to a joint session of Congress was an important moment for our country and for Israel. Iran’s aggression and support for terrorism throughout the Middle East and around the world is real. An overly concessionary approach to negotiations will not convince Iran to change their ways. We must have a strategy that increases the financial and diplomatic pressure on Iran, bolster the weakened credibility of our military option, and confront the growing threat of Tehran and its terrorist proxies.

"In my conversations with Prime Minister Netanyahu and my discussions with our military and intelligence officials, the threats to our nation are real and I will continue to work to ensure that we take these threats seriously.
Posted by Richard Beene at 3:04 PM