Supervisor Leticia Perez, a Democrat in the oil patch, takes a balanced view to the energy sector and some really good form around town on Veterans day

* ... LETICIA: I had a nice chat the other day with Supervisor Leticia Perez, a Democrat in a conservative county who has successfully balanced the interests of the energy sector with concerns over the environment. Perez voted in favor of streamlining oil and gas regulations, despite the fact

that so many in her party have condemned fossil fuels and in particular hydraulic fracturing. How does a loyal Democrat in the oil patch explain herself to the left wing of her party? "I am raising my son here," she explained, "and I want a respectful conveyance of the facts." Among those facts: the energy sector contributes a third of the county's property tax revenue, which benefits rich and poor alike, and Kern County leads the state in the total output of renewable energy like solar and wind. That's an admirable track record that cannot be dismissed, she said. Getting off fossil fuels is an admirable goal, she added, but it is a long process and those concerns must be balanced with the interests of a long-entrenched energy sector. 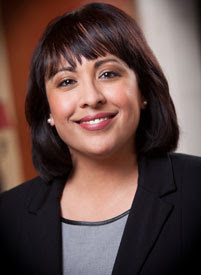 * ... EL NINO: We are starting to see the early effects of El Nino this year, and we are off to a good start. Mammoth received about 36 inches of slow during this latest storm, while Lake Tahoe recorded about a 20-inch snowfall. All this is good news for these resort areas, but we will have a long way to go and meteorologists warn we will need a steady series of storms before we make a dent in the drought. That said, the Los Angeles Times reports the wet weather will lead to fewer high smog days this year, and that itself is something to celebrate. (photo courtesy of the Los Angeles Times)

* ... GOOD FORM: Navy veteran Eugene Jackson and his wife Mavine were treated to a free breakfast at Denny's on Mount Vernon in honor of Veterans Day. "Our waitress came by our booth, picked up our ticket and said 'A young woman paid for your wife's breakfast.' We did not have the opportunity to meet her and we would like to thank her and Denny's for the breakfast treat."

* ... MORE GOOD FORM: And Mike Swen, a veteran of the Korean War, wrote that he too was treated to a meal at a restaurant near Stine and Planz "by a young Hispanic couple that didn't look like they had anything more than we do. It was so generous." Later, at Marie Calendar's, customers insisted he go to the front of the line and someone paid for his pies. "People need to know how generous people are in Kern County," he said. "I want to thank all of them."

* ... SEVEN  OAKS: It is easy to underestimate the impact that Castle and Cooke and its Seven Oaks development has had on the growth of the city. And now it is breaking ground on the latest extension of the master planned community with Highgate at Seven Oaks, built on 443 acres on the west side of the corner of Ming Avenue and Allen Road. No one doubts that Highgate will be a quality community, but the relentless push west, aided by the Westside Parkway, has changed the face of the city forever.

* ... BAKERSFIELDISM: George Culver says you might be a Bakersfield old timer "if you remember the Bakersfield High Drillers basketball team warming up to the tune of 'Sweet Georgia Brown' when they played their home games. Not sure when they stopped doing it but it was in the 1950s and 1960s.