'Prayer shaming' takes the level of civil discourse to a new low, the annual Christmas parade is a trash fest, and more rants on climate change

* ... PRAYER SHAMING: Right when you thought the level of civil discourse in this country could not get any worse, it did. Now comes a concept called "prayer shaming," which arose when

Republican presidential candidates sent out messages on social media saying they were extending their "thoughts and prayers" to the victims of the San Bernardino shootings. Seems innocent enough, but then anti-gun lobbyists struck back, belittling the idea of prayer if those offering the prayers were not supportive of gun control. First came the New York Daily News which devoted its front page cover to this headline: "God Isn't Fixing This." (No one suggested he would, by the way) That prompted one U.S. senator, Chris Murphy of Connecticut, to come forward with this missive: "Your 'thoughts' should be about steps to take to stop this carnage. Your 'prayers' should be for forgiveness if you do nothing—again." So now offering a sincere thought and prayer is subject to public ridicule? And so it goes. 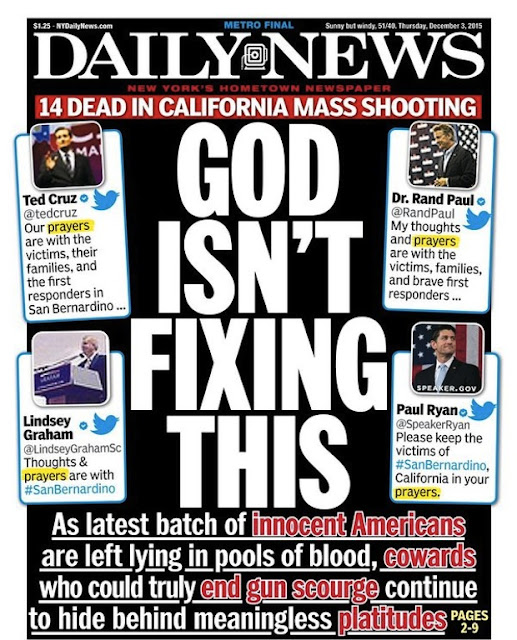 * ... TRASH: The annual Bakersfield Christmas Parade is a great way to usher in the holiday season, but it also reveals a dark underside of our community. When the festivities ended the parade route downtown, along 21st Street particularly, was left with mountains of litter that city crews were left to collect.

* ... VALLEY VISION: An important panel discussion on the future of the Central Valley will be held Tuesday at the Simonsen Performing Arts Center at Bakersfield College. The event will cover the energy sector, agriculture and water and housing, land use and transportation and will bring together some of the foremost experts on these topics, including spokesmen for the oil industry, environmentalists, state officials and conservationists. The first Vision for the Valley is sponsored by the Greater Bakersfield Chamber of Commerce and TBC Media and will begin with a 7 a.m. with breakfast with the first panel under way at 8:30 a.m. Contact the Chamber for tickets.

* ... SPOTTED ON TWITTER: "My special talents include: jumping to the worst conclusion possible and worrying about that thing for hours."

* ... BAD FORM: Gabrielle Lopez shared my concern with those folks who blow through red lights, putting them and others at risk. Said Lopez: "I am so sick and tired of seeing all these people run red lights every day. I mean they CLEARLY could stop but choose not to and just blow right on through like there is no one else on the road. I had an idea come to me today which while probably costly to implement may be a good solution: at random stoplights around town we could install a gate that pops up when the light turns red. So if there is a red light runner they will severely damage their vehicle and since they are randomly placed they don't
know when they will pop up and MAYBE people will think twice about running that red light if it costs them MONEY which is the only way that some people are going to get it."

* ... CLIMATE CHANGE: And finally, reader Joe Chavez shared with me this rant on climate change: "Climate change. Well here they go again feeling like they can control nature. The world is going to do whatever, be it heating, cooling, icing. Just like it's done for eons. To think we humans can save it or help it is ridiculous, We can't  even care for ourselves yet were going to save the planet. So ignorant, so self important."
Posted by Richard Beene at 9:25 AM