* ... CHARITY: We live in a crazy, scary and unpredictable world, but take the time to look around and you will always find glimmers of hope: neighbors helping those who are struggling, people

reaching out to each other to lend a hand, random acts of kindness among strangers. Consider what is happening today (Friday) from 8 a.m. to 11 a.m. in the alley behind the local Catholic Charities office on Chester Avenue. Working with the CAPK Food Bank, Catholic Charities will be distributing fresh produce to the community - all completely free of charge - until the produce runs out. Why? Because there is a huge need. Catholic Charities and other groups like them often work anonymously to fill important needs in our community, but they all deserve our support and thanks.

* ... CORD CUTTING: More Americans than ever are abandoning cable television and the traditional local networks in order to save costs, get more bang for the buck and choose exactly what they want to view. This trend toward "cord cutting" started with the millennials and - according to studies - has now become popular across all generations. One study found that some 35,000 Americans leave traditional cable every month. Consider this: a retired friend told me she lives solely off Netflix and original programming from Amazon Prime (she pays about $20 a month compared  between $150 and $200 monthly for fully loaded cable) while another friend told me he does the same but gets limited local programming with the HULU for an additional $8 a month fee. The implications for local TV, the major networks and their advertisers are ominously obvious. 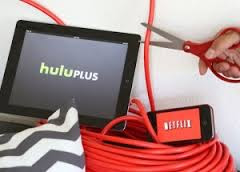 * ... SPOTTED ON TWITTER: "I guess I should have realized something was off when my poodle received a Wells Fargo credit card."

* ... GOOD FORM: Marilou Burlingame shared this pleasant encounter at a local Subway recently.  "When we went to pay for our purchases, we were told by the cashier that our orders had been paid for by the young man ahead of us (we probably reminded him of his grandparents). What a surprise! We thanked him profusely but failed to ask his name (shame, shame). Will definitely do the same for someone else. It was a great day, beautiful weather, my husband passed the test and lunch was paid for by a very nice young man. Doesn’t get any better than that!"

* ...  MEMORIES: When a reader mentioned the long-gone Coachlight Inn, it triggered these memories from Kelly Lucas. "When I dated my wife in the 1970s we’d go to the Coachlight Inn regularly on dates. I almost always ordered a couple of filets, one for me and one for my girlfriend, now my wife. The cost of the dinner was around $22, and that was a lot of money for a teenager. Coachlight boasted that patrons got to pick out their steak. So, once when ordering my $11 steak filet dinner I found out I could select a filet and have it prepared as the $8 shish kabob - a $3 savings X 2. That was a great deal, and meant money for dessert! Either Rudy never caught on, or figured my frequent patronage qualified me for a discount. My wife and I hold many wonderful memories of those dinners at the Coachlight Inn."

* ... MORE MEMORIES: And finally, my friend Dan Giordano shared this sweet memory of the old Stockdale Inn: "Richard, I remember both (Coachlight and Stockdale Inns) quite well and after reading your Wednesday post about them it brought back a some great memories. One being… the Stockdale Inn is where I proposed to my wife Patty 45 years ago. Thanks for the memory."