If it's fall, you can bet it is the non profit event season in town, Uricchio's rolls out some speciality menu items and a little history of the Boy Scout booth at the Kern County Fair

* ... FUND RAISING: If it is fall in Bakersfield you can bet there will be a major fund raiser somewhere across town every weekend. This past weekend there were two: the huge Garces BBQ,

* ... FOODIE: Looking for a new menu item for the cooler days to come? Check out the linguini with shrimp or the angel hair pasta primavera at Uricchio's Trattoria, two off the menu specials offered for the next two weeks. 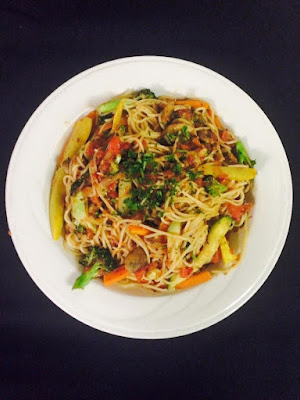 * ... OAK STREET: Is there a worst traffic choke point in town than the intersection of Oak and Truxtun from 3:30 p.m. on?

* ... SPOTTED ON TWITTER: "I'm in a long distance relationship. Sure, some people refer to it as a restraining order, but still."

* ... SPOTTED ON TRUXTUN: A white Toyota Solara convertible is cruising down Truxtun going too slow for traffic and weaving while its driver stares into her cell phone and happily texts.

* ... STARBUCKS: Remember when I told you that a barista at my local Starbucks was already well into her Christmas shopping? Well she told me the other day she is done, and it isn't even October. Talk about an over achiever.

* ... FAIR: Did you know the history of the Boy Scout baked potato booth at the fair? Jim Houck does, and he passed along this interesting bit of history: "It started in about 1953 as a project of Troop 8, which met at Horace Mann School on Niles Street. The scoutmaster was a great guy named L.L. Carpenter, known as Slim. The troop was sponsored by the Kern County Potato Growers Association. Urner's lent us ovens, my dad, who worked for Meadow Gold Dairies, got us butter and sour cream, and of course the Potato Growers gave us huge sacks of White Rose potatoes, a great Kern County variety that baked beautifully but is hard to find nowadays, unfortunately.n In those days Scout equipment usually came from the war surplus stores that sold beat-up pup tents, canteens, mess kits, folding shovels and knapsacks. This stuff was cheap but very heavy.n After our first year we'd made enough money to ditch our bulky canvas tents and replace them with big, light ones. Not sure what happened to Troop 8, but I saw someplace that the baked potato booth has been taken over by the local scout council. The wealth spreads." 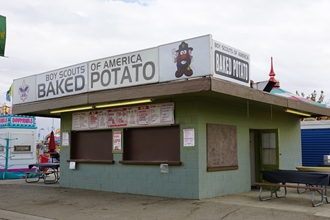